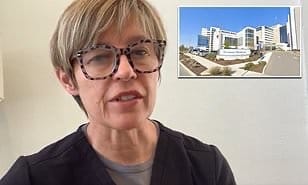 A TEXAS man died after attending a ‘COVID party’ because he thought coronavirus is a hoax, authorities said, Your Content can report.

The man was 30 years old at the time of his death, according to Methodist Healthcare Chief Medical Officer Dr. Jane Appleby.

‘This is a party held by somebody diagnosed by the COVID virus and the thought is to see if the virus is real and to see if anyone gets infected,’ Appleby told News 4 San Antonio.

The man who attended the party then became critically ill.

While in the hospital, Appleby said that just before he died, he looked at his nurse and said, ‘I think I made a mistake, I thought this was a hoax, but it’s not.’

Appleby also told KSAT that, ‘He didn’t really believe. He thought the disease was a hoax. He thought he was young and he was invincible and wouldn’t get affected by the disease.’

Appleby said that she decided to go public about this particular coronavirus death because the spike in COVID-19 cases has been continuing in Bexar County, where San Antonio is located.

She said that the coronavirus positivity rate has increased from five per cent just a few weeks prior to 22 per cent.

Appleby called it a ‘concerning increase.’

Bexar County has more than 18,600 confirmed coronavirus cases. The Department of Health said Friday that 923 new cases were reported, according to ABC News.

Texas, Florida and California are among numerous states experiencing a second wave of coronavirus infections.