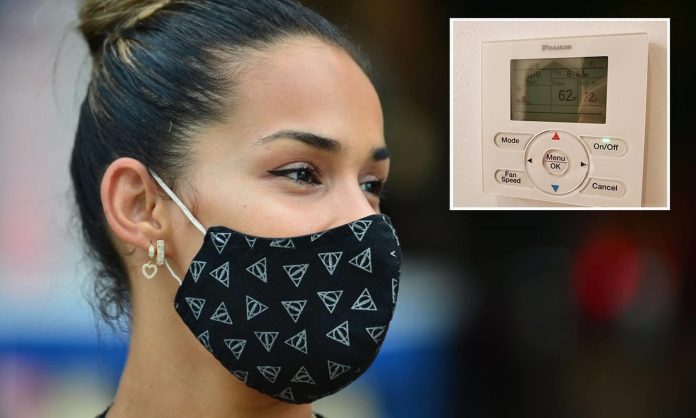 AIR CONDITIONING units that recirculate the same air in a room need to be either turned off or used with the windows open in order to stop airborne transmission of COVID-19 … according to experts in the United Kingdom.

According to the Telegraph, there are two types of air conditioners – ones that take in air from the outside and expel it out again and the ‘split unit’, which recirculates the same air.

Air conditioning units that do not have a ‘dedicated source of outside air supply into a room… could be responsible for recirculating and spreading airborne viral particles into the path of socially distanced users,’ according to the Chartered Institution of Building Service Engineers.

Dr. Shaun Fitzgerald, a fellow at the Royal Academy of Engineering, said that opening a window while having the air conditioning turned on may be the best way to reduce the risk.

“The recommended strategy now, if you have one of these split units, is to throw the window open and sacrifice your desire for a cold or cooler environment. If there is a modicum of wind it will move the air around,” he said.

He added: “If you can’t open a window, you probably shouldn’t be using the space if it is occupied by more than one person.”

WHAT’S MORE, researchers in April blamed the air conditioning unit for the spread of coronavirus among at least nine other diners who were eating in a restaurant in Guangzhou, China, in January.

Researchers say one member of that family had an asymptomatic case, and barely two weeks later, the patient along with nine others, including members of their family, as well as two other groups on nearby tables in the restaurant, had all become ill with the virus.

Therefore, they concluded, the air conditioner was likely to have spread the virus further between the affected tables.

WHO spokeswoman Dr. Margaret Harris rejected the claim by critics that the agency is biased against the idea of aerosol transmission, saying it recognized the possibility of airborne transmission during medical procedures from early on in the pandemic.

“Most super-spreading events have occurred in indoor places with poor ventilation, with crowding, where it’s very difficult for people to socially distance,” Harris said.