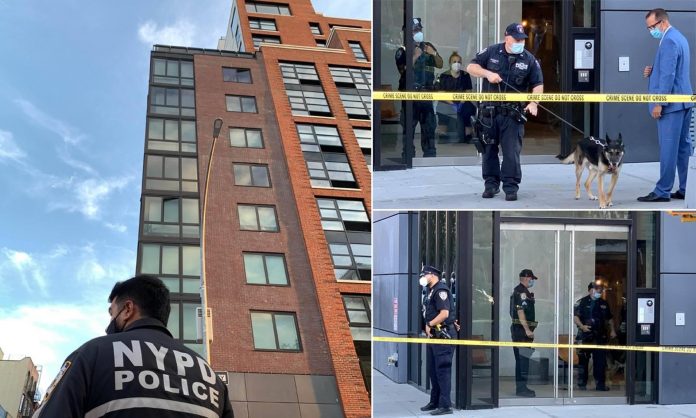 THE BUTCHERED BODY of a millionaire tech entrepreneur, 33, was found decapitated and dismembered next to an electrical saw in his luxury Manhattan apartment by his sister.

What’s more, Your Content has learned cops have footage that shows a professional killer attacking the man after sharing an elevator.

The man has been identified by as Fahim Saleh, a known millionaire tech entrepreneur.

The alarm was raised after one of Saleh’s siblings became concerned after not hearing from him for a day.

Her brother’s body had been cut up with a power saw, which was lying nearby and was still plugged in. The body parts had been sorted into different plastic bags.

According to sources close to the investigation, authorities have surveillance footage of the suspect entering the building and then using the elevator.

The killer shared the elevator with the victim before journeying up to the seventh floor with the door opening directly into Saleh’s apartment.

As soon as he walked out into his home, he was seen to fall to the floor after either likely being shot or stunned.

The manner in which the attack took place has led cops to believe the murder was carried out by a professional.

Saleh bought the luxury pad for $2.25 million last year and was proud of his new home, regularly posting pictures and video from the place on his Instagram.

Detectives found that Saleh’s legs below the knees along with his arms had been removed, with the missing body parts placed into bags.

Surprisingly, there was very little blood. The New York Times said that some effort had been made to clear up evidence.

Surveillance footage is also believed to have caught the killer carrying a bag and waiting to enter the elevator with his victim.

Sources told The Post that as the pair rode up to the seventh floor apartment together, Saleh appeared puzzled, but no sooner had he stepped out into his home, the attack began.

Cops are now trying to work out whether the arrival of the victim’s sister interrupted the dismembering of Saleh’s body.

“We have a torso, a head that’s been removed, arms, and legs. Everything is still on the scene. We don’t have a motive,” NYPD spokesman Sgt. Carlos Nieves said.

Later, police could be seen in the condo’s lobby at 265 East Houston Street where they could be seen speaking with a woman who was in tears and who was believed to be one of Saleh’s two sisters who had found the body.

“She was really upset. Crying. Shaking,” Danny Faust said to The Post. “She was just sitting there but you can tell her legs were shaking. She’s nervous. She was crying like, you know, wiping her eyes.”

“She was screaming when she first came down,” Faust said.

“Dead body? Okay. But when you hear chopped up and dismembered? That’s it. That’s a sick type of mind for somebody to do that,” he added.

Friends said he was a self-made millionaire who had a passion for gadgets and video games.