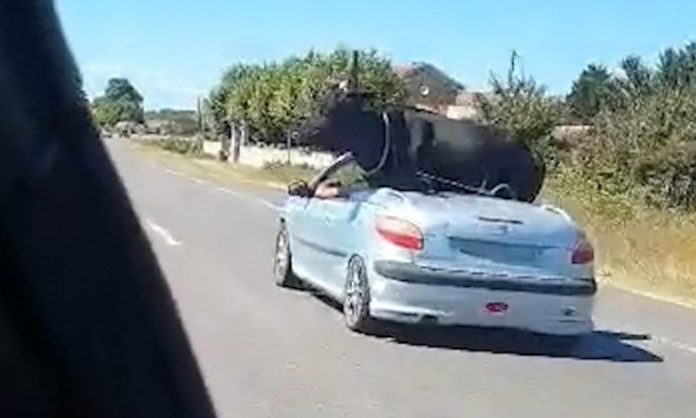 DESPERATE for a cruise to recover from months of coronavirus quarantine — a Frenchman was captured taking a daytime journey with his full grown bull in the backseat, Your Content has learned.

The bull in southern France was treated to a VIP experience as it was transported in the back of a convertible.

A white rope is looped around the bull’s neck and appears to be fastened to something inside the moving car.

The video was uploaded by Anthony Mathieu who said: “We see a lot of unusual things in Camargue but this was a first.

He explained: “We were going to the beach with a group of friends when we drove past this bull in a convertible car.

“We decided to drive around the roundabout further down to get a closer look at this scene.”

Anthony uploaded the video to Facebook on July 6, where he joked: “You can’t say you’ve never seen it.” It has been viewed more than 135,000 times.

The region is well known for cattle raising and bullfighting.