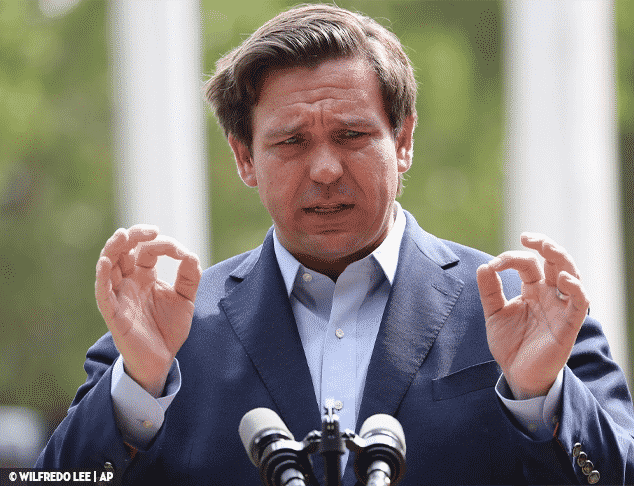 Gov. Ron DeSantis’ briefing was rushed and interrupted by protesters who scolded the Florida governor, Your Content can report.

DeSantis’ press briefing on his state’s response to the pandemic was met with loud protests, including shouts of “Shame on you Ron DeSantis!”

“You’re lying to the public!” yelled the mob, calling DeSantis a liar on live television.

One protester also told him that he’s doing nothing and is tricking the public as coronavirus cases surge in the state.

Your Content was first to report the first press conference ambush on DeSantis last week after an outraged man began to heckle him, yelling, “People are dying, and you are doing nothing!”

The heckler continued: “You are falsifying information, and you are misleading the public.

“More than 4,000 people have died, and you are blaming the protesters, and you are doing nothing! Shame on you!”

That day, the Florida Department of Health reported the second-highest number of test results received in one day, with 12,624 positive test results and 35 deaths reported to the state in the previous 24 hours.

Nearly half of Florida’s intensive-care units are at least 90 per cent full, and more than one in five are completely full, the Republican mayor of Miami, Francis Suarez, said last week.

“Miami is now the epicenter of the pandemic,” said Lilian Abbo, an infectious-disease specialist from the University of Miami Health System.

“What we were seeing in Wuhan six months ago, now we’re there.”

DeSantis said the testing labs were ‘backed up’, with a seven day delay in processing tests. He said they were increasing the capacity for testing.

“I hope that the governor and mayor will come to their senses and work with all of us to act quickly,” said Miami-Dade Democratic Rep. Debbie Mucarsel-Powell, whom Gimenez hopes to challenge as the Republican nominee in Florida’s 26th Congressional District.

“At best, we have a hole in our leadership at the state level and at the federal level,” Democratic state Sen. Oscar Braynon said.

“A coordinated effort between federal, state and local leaders would have stopped us from breaking the COVID case record yesterday.”