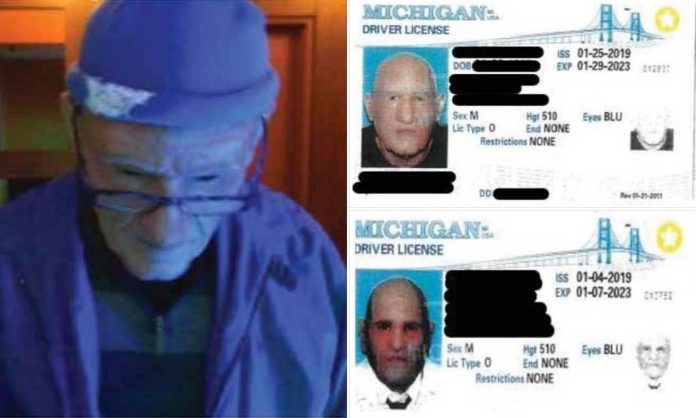 AN ELDERLY man who slithered his way to cash advance kiosks at a casino was exposed as a 35-year-old man who ‘used a prosthetic face mask and a mobility walker to pose as an elderly gambler and pull off a $100,000 casino heist,’ Your Content has learned.

John Christoper Colletti, 35, was arrested at the Prairie Band Casino and Resort in Mayetta, Kanas, by Prairie Band Potawatomi Tribal Police on March 12.

Casino surveillance allegedly showed Colletti dressed as an elderly white man wearing a straw hat, glasses and using a mobility walker as he made more than $20,000 in cash withdrawals from casino kiosks.

A 17-page criminal complaint and affidavit was unsealed on Thursday at a federal court in Detroit and Colletti will be held without bond until he can be brought back to Michigan, reported The Detroit News.

The investigation dates back to April and May 2019, when Colletti was suspected of stealing up to ten victims’ identity by buying their personal data online and creating fake drivers’ licenses, according to FBI special agent Julian MacBeth.

Colletti allegedly used VIP programs that offer gamblers cash advances from kiosks installed inside casinos to defraud his victims of $98,840 at the MGM Grand Detroit between April and May last year.

He went undercover in elaborate disguises including full prosthetic face masks, hats, glasses and surgical masks to avoid the watchful eye of the casino’s security cameras.

“The driver’s licenses also had sticky notes stuck to the back of the cards containing the victims’ social security number and telephone number, which were needed to complete the (casino) transactions,” the FBI agent wrote.

Footage is thought to show Colletti at the MGM Grand on May 23, 2019, wearing a prosthetic mask, blue jacket, dark cap, blue jeans and sunglasses.

Less than half an hour later Colletti had made 15 cash withdrawals totaling $30,000 before leaving in a cab. He was dropped off at the Pegasus Taverna restaurant in Greektown where he went into the bathroom.

“Approximately 10 minutes later, CCTV video outside of the restaurant shows Colletti exit the restaurant without the disguise, instead wearing a white T-shirt, blue jeans, dark shoes and carrying a black plastic bag,” the FBI agent wrote.

A year later Colletti was arrested after security officers in Mayetta asked his for more information because he was withdrawing so much money.

He immediately went into the bathroom and is thought to have changed out of his disguise. He had a ‘noticeable bulge down the front of his pants, believed to be the prosthetic face mask’ when he left the casino, according to investigators.

His clothes, walker $11,000 in cash and two Michigan drivers’ licenses, belonging to two victims and featuring prosthetic facemask-clad photographs, were found in the bathroom.

Two more counterfeit licenses, $16,000 cash, glasses and a casino voucher were found with Colletti when he was arrested.

A K9 deputy later found the elderly prosthetic mask on the ground near a light pole outside the casino.

Inside his rental car, a Nissan Versa, investigators found four prosthetic masks and a straw hat with a black ribbon that matched one worn by Colletti inside the MGM Grand, according to the affidavit.

Some 83 drivers’ licenses, 14 insurance cards with multiple names, a counterfeit $100 bill and books on how to get away with committing crimes were also found.

A recovered flash drive contained forgery documents, background checks on various people, tutorials on how to counterfeit money and Excel spreadsheets with more than 1,000 names.