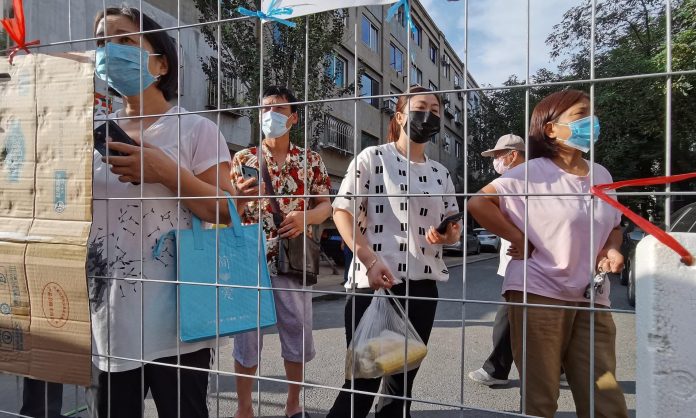 A NORTH-EASTERN Chinese city of 6million has entered what authorities called the ‘wartime mode’ as officials locked down communities to stamp out a fresh COVID-19 outbreak, Your Content has learned.

Dalian, a major port in Liaoning province, has registered 12 native infections since Wednesday after reporting no new cases for nearly four months.

Since the virus first surfaced in the central city of Wuhan late last year, the country’s official number of infections has been restricted to a trickle, mainly among arrivals from abroad. All mass lockdowns have been lifted.

Twenty-seven asymptomatic patients were also reported today. All of the cases found today are said to be colleagues of the first patient, who worked at a seafood processing company that deals with imported product.

On Friday, the Dalian Health Commission said the city had to ‘quickly enter wartime mode, go all-out, mobilise all people and resolutely curb the spread of the epidemic’.

Two ‘high-risk’ neighbourhoods had been placed under lockdown and were being fully disinfected, the officials said today.

The news comes as China is battling a new spike of coronavirus cases across the country.

As of Friday, mainland China have reported a total of 83,750 confirmed infections. The death toll remains at 4,634.