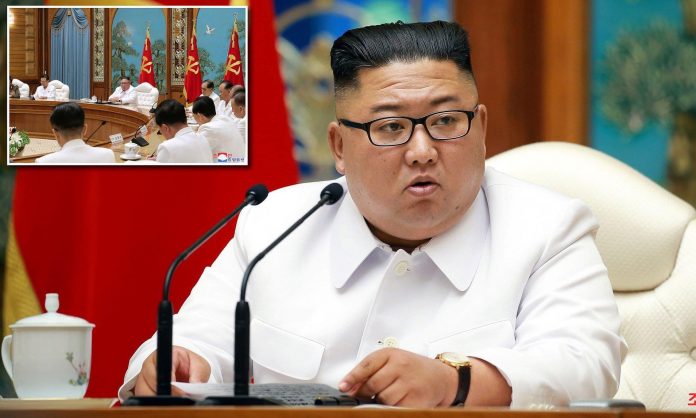 North Korea has declared a state of emergency after Kim Jong Un met with his top advisers to discuss the secretive county’s ‘first coronavirus case,’ Your Content has learned.

Kim declared a state of emergency and imposed a lockdown on the border city of Kaesong, calling it a ‘critical situation in which the vicious virus could be said to have entered the country,’ state news agency KCNA reported.

According to KCNA, a person who defected to South Korea three years ago returned across the fortified border that divides the two Koreas with symptoms that suggested COVID-19.

“An emergency event happened in Kaesong City where a runaway who went to the south three years ago, a person who is suspected to have been infected with the vicious virus returned on July 19 after illegally crossing the demarcation line,” KCNA said.

KCNA did not specifically mention whether the individual had been tested, but said an ‘uncertain result was made from several medical check-ups of the secretion of that person’s upper respiratory organ and blood,’ prompting officials to quarantine the person and investigate anyone he may have been in contact with.

The unnamed person ‘was put under strict quarantine as a primary step and all the persons … who contacted that person and those who have been to the city in the last five days are being thoroughly investigated’ and quarantined, KCNA said.

To address the ‘dangerous situation … that may lead to a deadly and destructive disaster,’ North Korean leader Kim Jong Un convened the emergency politburo meeting on Saturday to adopt a ‘maximum emergency system and issue a top-class alert’ to contain the epidemic, KCNA said.

Despite strict preventative measures ‘the vicious virus could be said to have entered the country,’ Kim said, according to KCNA, and that the government took the ‘preemptive measure of totally blocking Kaesong City’ on July 24.

North Korea has received thousands of coronavirus testing kits from Russia and other countries, and imposed strict border closures, with the country being almost totally closed off since January 30.

Thousands of people in North Korea were quarantined, but restrictions had recently eased, however on Wednesday, it emerged that North Koreans will reportedly be subjected to three months of hard labour for not wearing Covid-19 face masks under tough new rules.

State media said that Kim used an early-July meeting to urge officials to stay vigilant in the fight against coronavirus, warning of an ‘unimaginable and irretrievable crisis’ if they become complacent.