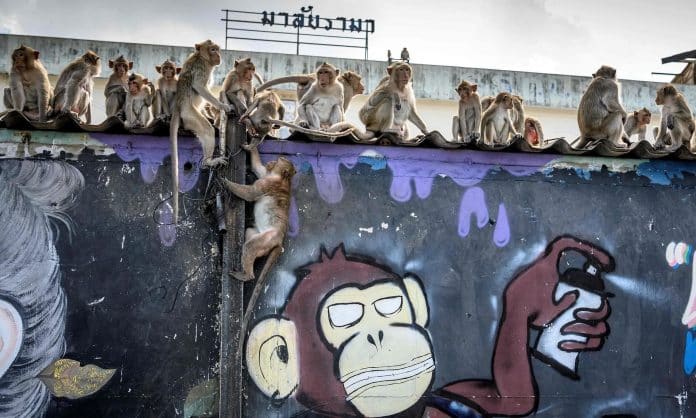 Police in Thailand have admitted that they are powerless to control the thousands of sex-crazed monkeys that have over-run a city, leaving people terrified to leave their homes.

The macaques in the city of Lopburi were tolerated, and even revered by some, but their population has been growing rapidly during the coronavirus crisis.

A lack of tourists and consistent source of food has led to the monkeys becoming aggressive, with as many as 8,400 now overrunning the city and forcing locals to avoid going outside where possible, adding to Lopburi’s economic woes.

Speaking to the The New York Times, one police officer said that he had been using a slingshot to fend off large groups of monkeys, to little avail, with the macaques returning in a matter of minutes.

‘It’s hopeless,’ he said. ‘Within a blink of an eye there are more monkeys. So many babies.’

Locals are forced to leave their jewelry at home and keep other personal belongings out of sight for fear that the thieves might snatch them, with some too afraid to leave their homes and forced to barricade their doors and windows.

Their growing numbers – doubling in three years – have made an uneasy coexistence with their human peers almost intolerable.

Reluctant to just let the monkey starve, people have since taken to feeding them junk food in an attempt to keep the peace, but many believe the sugary diet has turned them sex-crazed and that they are now breeding faster than before.

As a result of their new diet, the urban monkeys have lost muscle mass, and many suffer from blood disease and hypertension.

Local Kuljira Taechawattanawanna said that the monkeys make a horrible mess of the town, and that she feels like a prisoner in her own home.

‘We live in a cage but the monkeys live outside,’ she said. ‘Their excrement is everywhere, the smell is unbearable especially when it rains.’

Furthermore, attempts to control the population of the monkeys have so far proven fruitless.