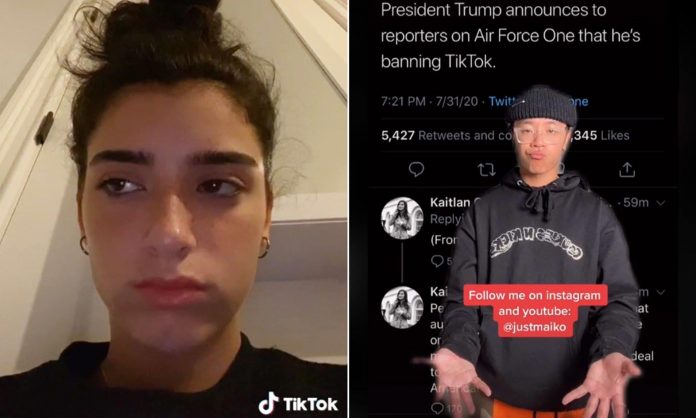 TikTokers took to the popular video-sharing app on Friday to say goodbye to their millions of followers, Your Content has learned.

President Trump announced he plans to ban the Chinese-owned platform as early as Saturday due to security concerns.

TikTok, which has grown its user base to an estimated one billion worldwide, is estimated to have over 80million American users.

The app has produced a number of TikTok ‘celebrities’ and influencers including Addison Rae, 19, and Charli D’Amelio, 16.

D’Amelio is the app’s most-followed star with 75.1 million followers, while her sister Dixie, 18, has amassed more than 32 million.

The social media outlet, where users can create 15 or 60 second videos, has grown wildly popular among young people over the last year and is estimated to be used by more than 80,000,000 Americans.

As news of the ban broke on Friday, TikTok stars rushed to say their final goodbyes to the app where they found celebrity status, asking fans to follow them on Instagram or YouTube instead.

As news of the ban broke on Friday, TikTok stars rushed to say their final goodbyes to the app where they found celebrity status, asking fans to follow them on Instagram or YouTube instead.

Among them was popular skin care guru SkincarebyHyram, who has amassed 5.2 million followers in recent months by sharing videos of his beauty and skincare tips.

‘Goodbye y’all. You have all made my life incredible for the last five months. I’ll miss our memories, seeing your beautiful faces and all the laughs,’ he said in a video.

TikTok mega-star and singer Dixie D’Amelio, also uploaded a video of herself reacting to the demise of the app, staring blankly at the camera as her song ‘Be Happy’ played in the background.

Dixie, 18, and sister Charli, 16, from Norwalk, Connecticut, became two of the most popular users on TikTok, which they joined last summer, after videos of their singing and dancing went viral.

The girls have been known to make videos with fellow TikTok celeb Addison Rae, who is followed by 53.3 million users.

Popular TikTokers Tony Lopez and Michael Le, also known as JustMaiko, each shared videos asking fans to find him on other social media platforms before the app shuts down for good.

The shuttering of the app will not only be a loss to the millions of fans joined to participate in viral trends, but it has sparked concerns for those who now use it to make a living.

Earlier this year, Charli D’Amelio became the first TikTok star to land a Super Bowl commercial when she appeared in an ad for Sabra Hummus.

As for getting paid for social media content, the teenager reportedly charges up to $100,000 per post, according to Cosmopolitan.

The same goes for Addison Rae, who joined TikTok last July and has since amassed a massive following, with 3.1billion likes, and has been featured in videos with the Kardashians.