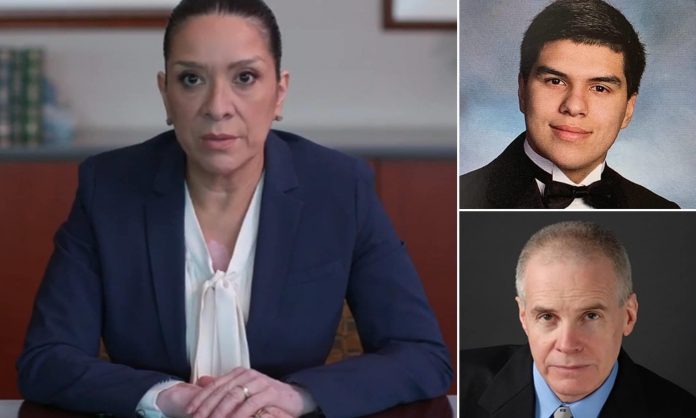 New Jersey Federal Judge Esther Salas released a recorded video message Monday morning — breaking her silence to reveal her son, 20, died protecting his father from misogynistic murderer lawyer who opened fire on them at their home — as she calls for greater privacy for judges.

Hollander killed Daniel and also wounded Salas’ husband, Mark, before fleeing the state and shooting himself the next day. He is also believed to have killed lawyer Marc Angelucci in Los Angeles eight days earlier in a reckless murdering spree that was prompted by his terminal cancer diagnoses.

Salas, in a video released on Monday morning, said the killings showed how dangerous it can become for judges and their families when they have to make ‘tough calls’ in court.

“Two weeks ago, my life as I knew it changed in an instant and my family will never be the same. A mad man, who I believe was targeting me because of my position as a federal judge, came to my house,” she said.

She went on to reveal that the family had been celebrating Daniel’s 20th birthday over the weekend.

On Sunday July 19, she and her husband went to church and allowed Daniel to rest.

Salas said her son told her: ‘Let’s keep talking. I love talking to you mom.’

“It was at that exact moment that the doorbell rang. Daniel looked at me and said, ‘who is that?’”

“Before I could say a word, he sprinted upstairs. Within seconds I heard the sound of bullets and someone screaming ‘no,’” she said, fighting tears.

Hollander was holding a FedEx package in his hand. Salas revealed that her son and her husband went to the door at the same time and that Daniel stepped in front of his father to take the first bullet.

“Daniel being Daniel protected his father. And he took the shooter’s first bullet directly to the chest.

“The monster then turned his attention to my husband and began to shoot at my husband. One shot after another,” she said.

Salas’ husband Mark, 63, survived but is still in the hospital after undergoing multiple surgeries.

She said the pair are now living ‘every parent’s worst nightmare’ and that she does not want anyone else to experience it.

“My family has experienced a pain that no one should ever have to endure. I am here asking everyone to help me ensure that no one ever has to experience this kind of pain,” she said.

“We may not be able to stop something like this from happening again. But we can make it hard for those who target us to track us down.

“As federal judges, we understand that our decisions will be scrutinized. Some may disagree strongly with our rulings.

“We know that our job requires us to make tough calls. Sometimes those calls can leave people angry and upset. That comes with the territory.

“We accept that. But what we cannot accept is when we are forced to live in fear for our lives because personal information like our home addresses can easily be obtained by anyone seeking to do us or our families harm.

“Unfortunately for my family, the threat was real. The free flow of information from the internet allowed this sick and depraved human being to find all our personal information and target us.

“Currently, federal judges’ addresses and other information is readily available on the internet. In addition, there are companies that will sell your personal details that can be leveraged for nefarious purposes.

“In my case, the monster knew where I lived and what church we attended and had a complete dossier on me and my family.

“At the moment there is nothing we can do to stop it and that is unacceptable. My son’s death cannot be in vain,” she pleaded.

As Your Content readers know, the suspect, who resides in New Jersey, and took his own life in New York’s Catskills has been identified as lawyer and men’s rights activist Roy Den Hollander. https://www.yc.news/2020/07/20/roy-hollander-identified-as-assassin-who-killed-son-of-federal-judge-tied-to-epstein/

The judge was assigned a civil financial fraud lawsuit against Deutsche Bank.

Investors say they were misled by the bank which continued to do business with Jeffrey Epstein after his 2008 conviction for soliciting child prostitutes.

Salas previously presided over the trial of former Real Housewife Teresa Giudice in a case regarding financial fraud.

Her husband is a prominent criminal defense attorney who has represented members of the Bloods.

He switched to private practice after serving as a prosecutor in New Jersey for more than 10 years.

Friends say Salas frequently made remarks about being a target because of her job and receiving threats.