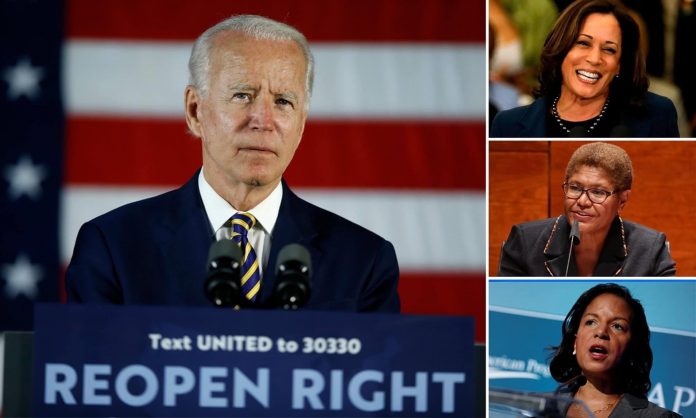 Former VP Joe Biden said last week he would announce his running mate the first week of August but that appears unlikely to happen this week, Your Content has learned.

Amid pressure to name a black woman — Biden has been unable to narrow his pick.

But now that’s been moved back by two weeks, The Washington Post reported, amid worries from Biden supporters that the process has become “messier than it should be,” pitting women — and especially black women — against one another.

The delay also indicates there is no clear favorite among Biden or his allies to be his running mate.

The former vice president is reportedly going to speak to five or six contenders instead of having the traditional short list of three names.

And allies of all the contenders are lobbying the former vice president and his campaign to pick the running mate of their choice.

The presumptive Democratic nominee joked last week he would have to escape the TV camera crews that are parked outside of his Wilmington, Delaware, home so he could meet his pick without being caught.

“I’m going to try to figure out how to trick you all so we can meet in person. I’ve got crews outside my house. I don’t think it matters actually. What I said is I’m going to have a choice in the first week in August, and I promise I’ll let you know when I do,” he said at a press conference on Tuesday.

At least nearly a dozen women have been named as potential partners for Biden after he vowed to put a woman on the ticket with him. But, in the wake of the demonstrations that sprung up after the death of George Floyd, pressure has increased for him to name a black woman.

“It’s been relentless. It’s been unfortunate. But I must say it’s been predictable,” Donna Brazile, a former interim chair of the Democratic National Committee, told The Post. “It’s extremely disappointing, because many of these attacks . . . are being made by Democratic men who should know better.”

“I would hope that in this selection process, we are mindful that Black women — and women of color — deserve respect,” she added.