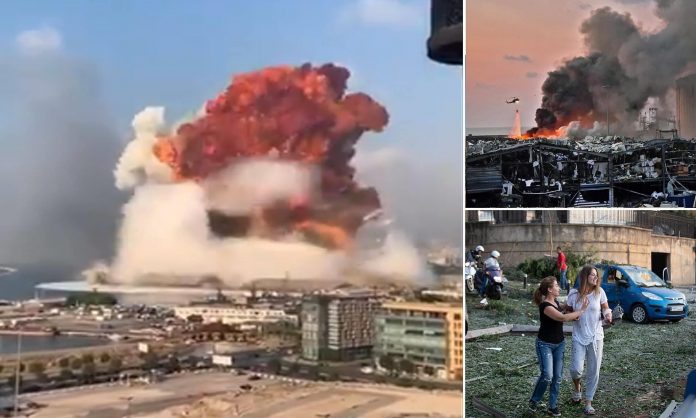 One of the world’s biggest-ever peacetime explosions tore through the port in Beirut last night has killed at least 100 people and wounded more than 4,000, Your Content is being told.

The new count comes from an official with the Lebanese Red Cross who spoke to the Associated Press overnight Wednesday.

The official, George Kittaneh, says the toll could rise further.

According to the AP, it was the most powerful explosion ever seen in the city, which has endured civil war, conflicts with Israel and terror attacks.

More than 2,750 tons of highly explosive ammonium nitrate, the main ingredient in fertilizer bombs, detonated when a fire apparently sparked by a welder spread to the warehouse where it had been stored for six years.

Prime Minister Hassan Diab has vowed those responsible will ‘pay the price’ and plunged the country into a two-week state of emergency.

The United States, the UK, France, the Gulf states and even bitter rivals Israel have offered aid to the country, which is already grappling with twin economic and coronavirus crises.

Witnesses likened the explosion to a nuclear detonation, and scientists making initial calculations said the 2,750 tonnes of hazardous chemicals produced a blast equivalent to about three kilotons of TNT – roughly a fifth the force of the Little Boy atomic bomb dropped on Hiroshima in the Second World War.

As Your Content readers know, President Trump last night called the explosion a ‘terrible attack’ and said US generals had told him it appeared to have been caused by a ‘bomb of some kind.’

When asked by a reporter if he was certain the explosion was in fact an attack, Trump confirmed he had ‘met with some of our great generals and they seem to feel that it was.

“This was not some kind of a manufacturing explosion type of event. They would know better than I would,” the president continued. “They seem to think … it was a bomb of some kind, yes.“

Countless videos of the blast show fires and thick plumes of smoke emanating from a building in Beirut’s port area before a mushroom cloud erupts, sending a shockwave ripping through the city.

Hundreds of buildings were leveled in the horrific explosion. The death toll is expected to rise significantly as emergency personnel continue to pull out bodies out from beneath the rubble.

“Our prayers go out to all the victims and their families,’ declared President Trump. “The United States stands ready to assist Lebanon.”

Prime Minister Scott Morrison said the Australian embassy had been ‘significantly’ damaged in the deadly blast but staff escaped with minor injuries.

“It’s my deep regret to inform you that one Australian has been killed in this horrific blast,” he told the Today show on Wednesday morning.

“I know there will be many prayers in the churches and the mosques in Australia but given the COVID restrictions, I would just urge the appropriate response.“