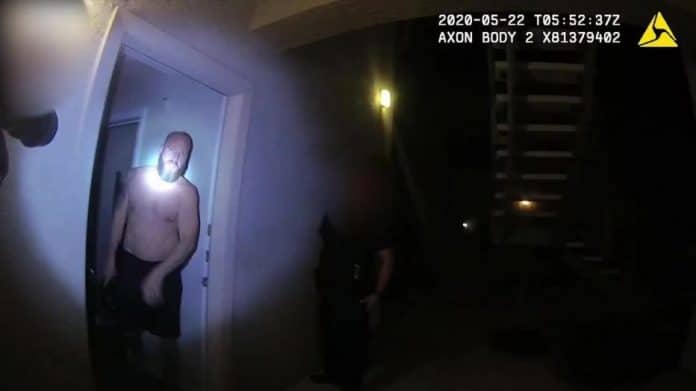 It was all fun and games for a man and his girlfriend until a mere noise complaint from a neighbor resulted in cops shooting and killing a him within five seconds of him opening his front door, Your Content has learned.

Ryan Whitaker opened the door holding a gun in his right hand which is legal in Arizona but it made the cops fear for their lives, AZ Central reports.

But the cops never gave him a chance to put the gun down which he appeared to be trying to do when one cop shot him in the back three times.

“Why did you guys shoot him?” Whitaker’s girlfriend, Brandee Nees, screamed as she stepped into the doorway.

“He just pulled a gun on us, ma’am,” Officer Jeff Cooke of the Phoenix Police Department said.

“Because it’s dark and someone just knocked on the door,” Nees responded.

When Phoenix police officer John Ferragamo asked Nees if she and Whitaker had been fighting, she told him they were only playing video games.

“Literally we were making salsa and playing Crash Bandicoot so there may have been some screaming from PlayStation but it wasn’t domestic violence or anything,” she said.

The incident took place on May 22 after an upstairs neighbor called police to complain about the noise.

When the dispatcher asked if the verbal argument has turned physical, he said it had turned physical but sounded as if he was just saying that to get police to respond quicker, reports Pinac News.

“It could be physical,” he said. “I could say yeah if that makes anybody hurry on up. Get anybody here faster.”

The cops arrived eight minutes later and knocked on the door with one of them yelling “Phoenix police” before both of them stepped off to the side, making it extremely difficult for anybody to see them through the peephole.

When Whitaker opened the door with the gun to his side, the cops shined their flashlights in his face, blinding him before noticing the gun.

“Whoa! Hands! Hands! Hands!” Ferragamo yelled as Whitaker lowered his body with his left hand in the air and his right hand appearing to be putting the gun down.

Cooke then fired three times, shooting him in the back.

He challenged Phoenix Police Chief Jeri Williams to fire Cooke, who has been with Phoenix PD for about three years, and arrest him for murder.

“We want justice for Ryan,” he said. “Be accountable for your actions. Hold people accountable.”

“This proved everything I’ve been saying,” Whitaker’s sister, Katie Baeza, said. “In a fraction of a second, Jeff Cooke was a judge, jury and executioner of my brother.”

“If you watch that video and are OK with it, you need to step down,” she continued, directing her comment at Williams. She also said the man who called 911 escalated the situation unnecessarily and should be held accountable for that.