Gun-toting St. Louis Couple Who Were Ambushed by Protesters to Appear at RNC
G 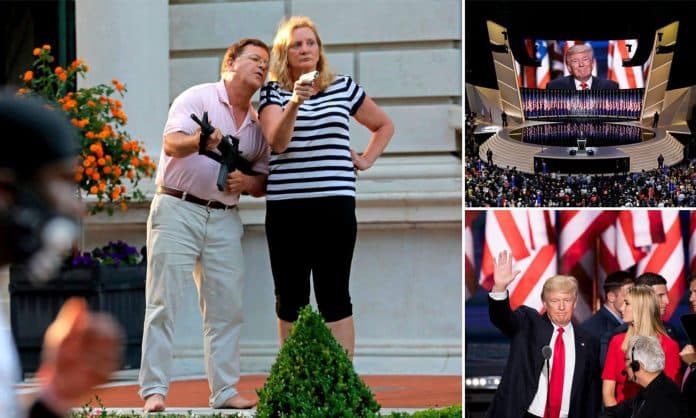 The gun-toting St. Louis couple who threatened Black Lives Matter rioters outside their home will appear at next week’s Republican National Convention to show their support for President Trump, Your Content has learned.

An adviser for President Trump on Monday confirmed the participation of Patricia and Mark McCloskey at the week-long virtual event where the president hopes to secure more votes for the White House race.

The McCloskeys face felony charges of unlawful use of a weapon after confronting rioters in their upscale Missouri neighborhood with weapons back on June 28.

On July 20, St. Louis Circuit Attorney Kim Gardner – a Democrat – charged the couple with felony unlawful use of a weapon for displaying guns during the protest.

According to the couple, they were protecting themselves from the armed demonstrators who had threatened to kill them.

The McCloskeys also filed a motion to disqualify Gardner from pursuing charges against them, after it emerged she had mentioned the case in material for her reelection campaign.

They said the attorney was siding with ‘criminals’ who were trespassing on private property.

White House Press Secretary Kayleigh McEnany told reporters on July 21 Trump had told her ‘it is absolutely absurd what is happening to the McCloskeys’.

“He noted that this is an extreme abuse of power by the prosecutor and noteworthy that there have been many cases brought to her attention of violent rioters that she’s failed to charge and instead she’s charging the individuals who are defending themselves from violent protesters,” she said.

McEnany said Trump told her felony gun charges against the couple were ‘extreme’ and an ‘egregious’ abuse of power by the St. Louis prosecutor.

The McCloskeys could face up to four years in prison for the class E felony.

However Gardner has said she is recommending a diversion program such as community service rather than jail time.