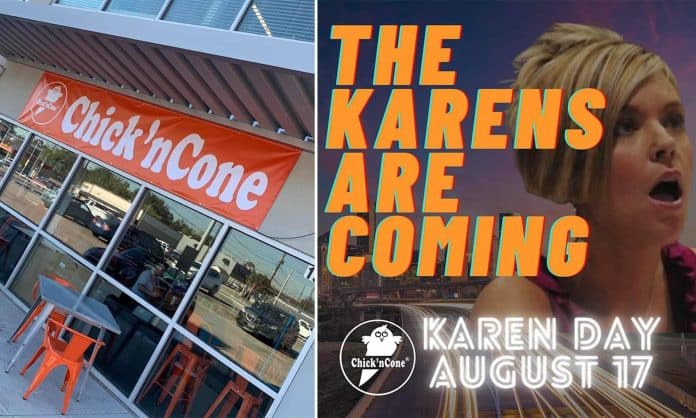 A Texas fried chicken restaurant hosted ‘Karen Day’ where ‘all good Karens’ were able to get a free meal — but ONLY if they said, ‘I want to speak to the manager.’

The restaurant made the offer for a free meal to anyone called Karen after the name got a bad rap because it is used to describe entitled white women who have been seen spitting on essential workers, throwing fits of rage in supermarkets over wearing face masks – and in one case, calling 911 on a black man who asked her to leash her dog.

Chick’nCone – a fried chicken chain – says the idea behind the very targeted promotion was to ‘show sympathy to the good ‘Karens’ of the world’ by offering anyone with Karen as a legal name free food.

The promotion also poked fun at the behavior of ‘bad Karens’ people and asked that eligible participants show ID before saying the phrase: ‘I want to speak to the manager.’

Word spread far and wide to Karens across the Houston area leading to around 40 women with the name showing up to take advantage of the free meal, which consists of a waffle cone filled with fried chicken.

‘The event was well received and got a lot of attention,’ Karen De Amat told Fox News.

At one point the manager of the chain, Terrance Foley, forgot about the Karen Day promotion and after two Karens asked to ‘speak with the manager’, he ended up asking what it is they wanted.