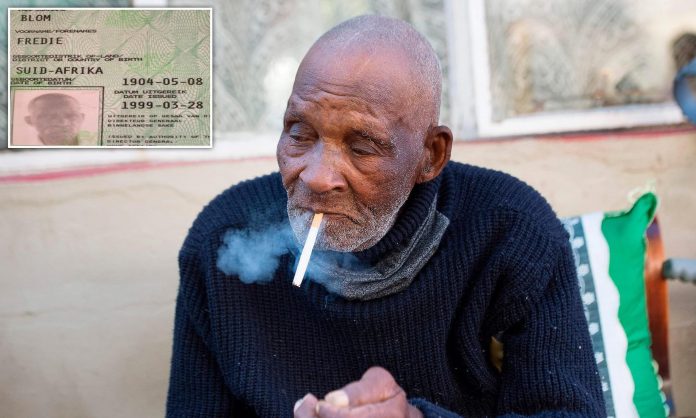 The world’s oldest man has died at 116, Your Content can report. It comes just four months after his 116th birthday when he complained he couldn’t find any tobacco to roll his own cigarettes due to the coronavirus lockdown.

He was 8 when the Titanic took its first and last journey in 1912. Born on May 8 1904, South African Fredie Blom had ‘lived this long because of God’s grace,’ he said on his birthday earlier this year.

The 116-year-old told local media the most challenging part of his country’s lockdown was that he was unable to buy tobacco to roll his own cigarettes on his birthday, his only wish for the special day.

South Africa’s banned the purchase of alcohol and cigarettes during lockdown in a bid to decrease hospital admissions from booze-related violence on the country’s streets.

The Guinness World Records lists the eldest living man as Briton Bob Weighton, who died in May aged 112.

His death was ‘not a COVID death at all, it’s normal natural death,’ Naidoo said in reference to the coronavirus pandemic.

Blom stopped visiting doctors more than two years ago, claiming he was tired of being pricked and prodded.