Kim Jong-un Said to Be ‘In Coma’ with Kim Jo-jong to Assume Power: Diplomat
K 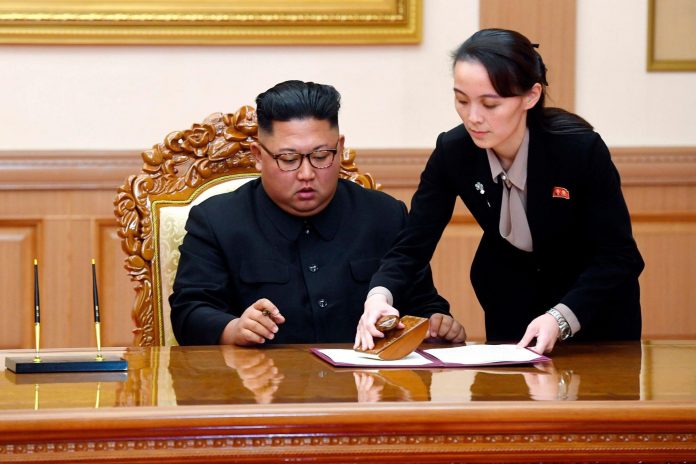 Kim Jong-un is ‘in a coma’ with North Korea passing power to his sister, Your Content has learned.

The former aide to South Korea’s late president Kim Dae-jung made the claim about the leader days after he handed over some powers to his younger sister.

Chang Song-min told South Korean media: “I assess him to be in a coma, but his life has not ended.

“A complete succession structure has not been formed, so Kim Yo-jong is being brought to the fore as the vacuum cannot be maintained for a prolonged period”, he told South Korean media.

A few days ago the National Intelligence Service (NIS) announced Jong-un will still “exert absolute power” but he will gradually transfer his authority to Kim Yo-jong “to ease stress.”

It was thought that a “botched” heart operation to fit a stent had either left him gravely ill or killed him.

However the death rumours were quashed when he was seen at a fertiliser factory’s opening ceremony in Suchon, 30 miles north of the country’s capital Pyongyang.

But if Jong-un is no longer in a position to lead the rogue state, it could spell disaster for its people, it is claimed.

Chris Mikul, who penned ‘My Favourite Dictators’ last year, said Jong-un may be the “most benevolent” leader to rule the hermit kingdom – despite being a “brutal dictator”.

Speaking to Express.co.uk this year, Mr Mikul said: “While no one likes to see the continued success of a brutal dictator, if Kim Jong-un had actually died … it’s not necessarily going to be a good thing for the world.

“We know he has got nuclear weapons now, which makes him the most successful Kim because he has managed to attain a goal they were trying to achieve since the Sixties.

“They know nuclear weapons are the insurance policy that will keep the regime in power forever and he’s done it – but he won’t pull the trigger because it would end in the destruction of North Korea.”

Mr Mikul argued that having Jong-un in power is arguably better for the people of North Korea than any potential successor.

“It’s probably better to have Kim Jong-un ruling, which is horrible to say but it appears that the economy is better under him than it has been, or at least as good as it’s ever been under any of the Kims,” he said.

“That said, we don’t know what is happening out in the countryside and how many people are still going hungry.”

He also believes that country’s regime would collapse in a disastrous turn of events as North Koreans would release they have been lied to which could spark mass suicides.

He warned: “Once this regime falls everything they have believed in since they were born will dissolve, it will be horrendous.