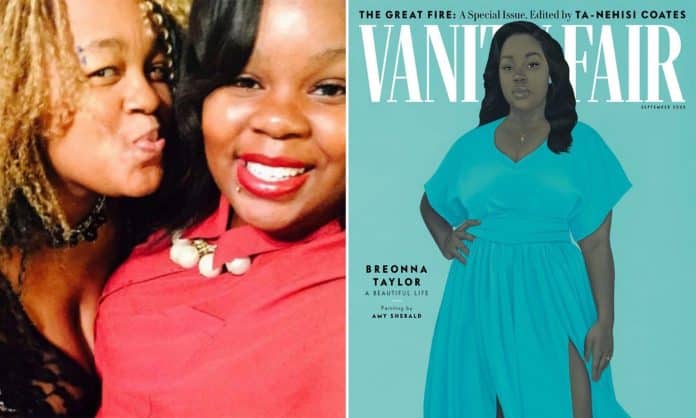 Breonna Taylor’s mother revealed police waited 11 hours to tell her that her daughter had been killed, then refused to let her see the body — and she only found out cops had shot her dead by watching the news.

Speaking to Vanity Fair, Tamika Palmer recalled the gut-wrenching moment that Breonna’s boyfriend, Kenneth Walker, phoned her in the middle of the night to say that her daughter had been shot, after ‘somebody kicked in the door’ to their Louisville apartment.

But Tamika then faced an agonizing wait for information, revealing that police kept her in the dark for hours on end, refusing to tell her where Breonna was, and only delivered the devastating news of her death by telling Tamika 11 hours after the shooting that her daughter ‘was sill in the apartment’.

Breonna was shot dead by police officers in her home on March 13 during a no-knock search warrant – but Tamika didn’t learn that her daughter had been killed at the hands of the cops until days later, when a friend told her to turn on the news.

Tamika – who also opened up to the publication about her own childhood, and Breonna’s youth – says police also refused to let her see her daughter’s body until more than 24 hours after her death, when Breonna was taken to a funeral home.

In her candid first-person op-ed for the publication – which featured a portrait of Breonna on the cover of its September issue – Tamika writes that she was awoken in the middle of the night on the day of her daughter’s death by Kenny, who phoned her to say that Breonna had been shot.

‘Kenny calls me in the middle of the night,’ she recalled. ‘He says, “Somebody kicked in the door and shot Breonna. I am dead asleep. I don’t know what he’s talking about. I jump up. I get ready, and I rush over to her house.’

After arriving at Breonna and Kenny’s apartment, Tamika was told by an on-duty officer to go to the hospital, where one injured cop and another injured person had been taken.

Tamika waited at the hospital for two hours, before being told that her daughter’s name was not in the system, and that staff had ‘no recollection of this person being on the way’.

When she returned to Breonna’s apartment, she spoke to a detective who grilled her about her daughter and Kenny, asking ‘if she knew anybody who would want to hurt’ them, and whether Tamika though either of them ‘were involved in anything’.

‘And I go, “Absolutely not.” Both of them got jobs. They go to work. They hang out with each other. That’s about it.’

When Tamika asked where Kenny was, she was told to ‘hold on’. The detective – whose name she cannot remember – then left her for another hour, before returning to ask her mother questions about Kenny and Breonna, this time questioning whether the couple ‘had been having any problems’.

After once again shutting down the detective’s line of inquiry, Tamika is finally told that Kenny has been taken to the police station, where he was ‘trying to help [officers] piece together what happened’.

She was then left to wait for ‘a number of hours’, until ‘about 11 in the morning’ when an officer told Tamika that police were done with the scene, and that she would be given access to the apartment as soon as they had left. The cop did not give her any information about her daughter until Tamika pressed him.

‘I say, “Where’s Breonna, why won’t anybody say where Breonna is?” He says, “Well, ma’am, she’s still in the apartment.” And I know what that means.’

But Tamika admits that she thought to herself, ‘Maybe it’s not Breonna,’ for hours after that because she was not actually allowed to see her daughter’s body, explaining: ‘The police never let me see her. But I know it’s her house, you know what I’m saying? But just the fact that I physically haven’t seen her….’

Tamika recalled her confusion over the circumstances of her daughter’s death, writing that she spent hours trying to work out who had kicked in Breonna’s door, because the police ‘weren’t talking to her or telling her anything’.

She added that she spent much of the day crying and ‘trying to figure it all out’, revealing that she had no idea cops had been responsible for her daughter’s death until the following day, when a friend told her to turn on the news.

She also discovered that Kenny had not been at the station assisting officers with their inquiries, but that police had initially attempted to charge him with attempted murder after he fired his gun at the cops who broke down their door without warning in the middle of the night.

Tamika lashed out at the police over their handling of the case, questioning how officers could have grilled her about about whether anyone would have wanted to hurt Breonna and Kenny, and asking if the couple might have been fighting, when all along her daughter had been killed at the hands of their colleagues.

‘I am pissed off because I know how hard Breonna worked,’ she wrote. ‘I know that Breonna ain’t about that life. Breonna couldn’t tell you where to buy a dime bag of weed. She isn’t that person on the news. Neither is Kenny.’

‘The funeral home calls me when they get her body,’ she recounted. The police never let me see her. They aren’t talking to me.

‘It’s after midnight [the day after Breonna’s death] when I get the call. And they say I can come see her.

‘Everybody is with me. My whole family — my four sisters, my dad, my daughter Juniyah, my sister’s boyfriend, my boyfriend, the kids, a couple of close friends. Nobody wants to be left out.’