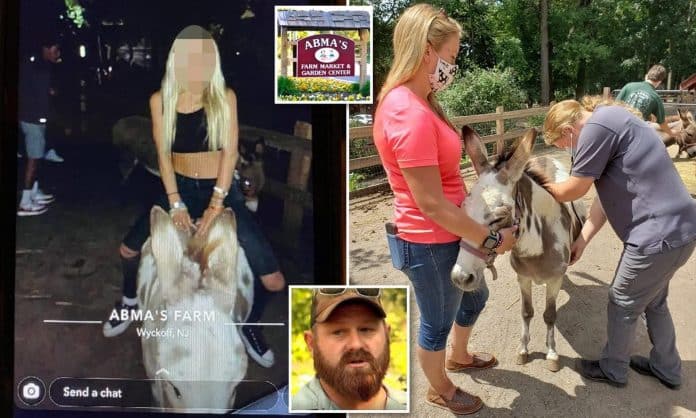 A group of New Jersey teenagers who broke into a petting zoo and abused animals by riding on donkeys and putting lipstick on a pony fled when the owner chased them away after seeing images of their antics on social media.

Jimmy Abma, a fourth-generation farmer whose family has owned Abma’s Farm in Wyckoff, New Jersey, for more than 80 years, received a message on his phone at around 10:30pm on Saturday.

It showed a young girl riding on a miniature donkey.

Abma recognized the animal, which he confirmed to be his after seeing that the Snapchat image also had the caption ‘Abma’s Farm’ attached toward the bottom.

He also grew concerned since the miniature donkeys on his property are not big enough to support the weight of a teenager.

‘Obviously, we’re closed, so that raised a concern to me right off the bat, that there’s people trespassing, the animals are somewhat in danger and I just need to figure out what’s going on,’ he told WCBS-TV.

Abma, who lives on the property, said he immediately ran outside and chased at least half a dozen youngsters off of his property, which includes a barnyard petting zoo, a farm, and a supermarket.

He was shocked to discover that the gates to the petting zoo were open and some of the animals had been traumatized.

‘Couple of the animals you couldn’t even get close to,’ Abma said.

‘We did a full count on the animals and we’re still trying to account for all of them so it’s just a frustrating thing.’

As he dialed 911, the two teenagers ran off.

‘Whatever these kids did they need to be held responsible for it,’ Abma told WABC-TV.

On Facebook, Abma wrote that all of the animals were accounted for and that the barnyard would be closed on Monday so as to allow a veterinarian to come to the property to conduct a wellness check.

A local newspaper, Daily Voice, reported that the young girl photographed while riding on the miniature donkey is a 17-year-old student-athlete enrolled at River Dell High School in Bergen County.

“Our one miniature pony here, he had lip gloss, and some sort of lipstick across his face, and he was the one who was the most skittish out of all of them,” Jimmy Abma told NBC 4 News.