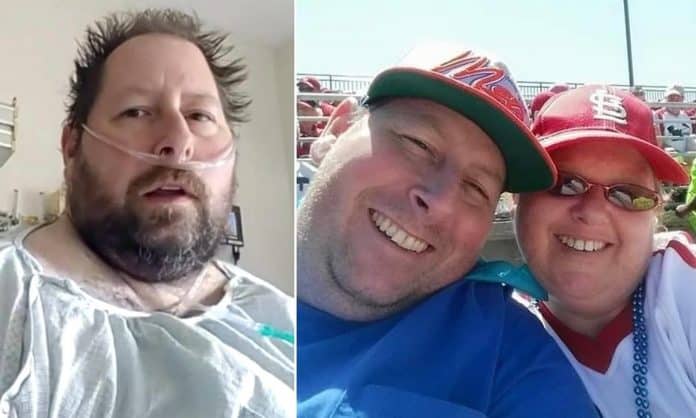 ‘I hope she can forgive me’ said a Florida Uber driver who believed COVID-19 was a hoax and refused to wear a mask, revealing his pastor wife has died from the virus, Your Content can report.

The tragic news comes three months after they both caught it and were admitted to the ICU.

Brian Lee Hitchens and his wife Erin both caught the deadly virus back in May, but, swayed by conspiracy theories on Facebook about 5G cellular networks and coronavirus being a ‘plandemic’ which was no more severe than the flu, neither initially sought medical help.

The couple were soon hospitalized, but while Brian eventually recovered, 46-year-old Erin, who has asthma, fell critically ill.

She died earlier this month from heart complications caused by COVID-19, after more than three months of battling the illness.

Speaking to the BBC, Brian said that he ‘wished [he’d] listened from the beginning’ about the severity and dangers of the virus, adding that he hoped his wife would forgive him.

‘This is a real virus that affects people differently. I can’t change the past. I can only live in today and make better choices for the future,’ Brian said.

‘She’s no longer suffering, but in peace. I go through times missing her, but I know she’s in a better place.’

Brian said he nor Erin, who was a pastor, followed health guidance at the start of the pandemic because of the misinformation that they had been reading on social media.

The grieving husband continued to work as a driver for Uber and Lyft, as well as collecting his wife’s medicine without taking any safety precautions, ignoring social distancing rules and not wearing a mask.

The couple, Brian says, had not one firm belief about COVID-19. They veered between believing the virus was a ‘faux disaster’, linked to 5G technology, or a real, but incredibly mild illness.

Much of what they believed to understand about the virus at the times was ascertained from misinformation they’d stumbled across on Facebook.

‘We thought the government was using it to distract us,’ he told the BBC. ‘Or it was to do with 5G.’

But when the couple fell ill in May, Brian took to Facebook to pen a lengthy explainer detailing that he and Erin had been misled by what they’d seen about the virus online.

‘Many people still think that the Coronavirus is a fake crisis which at one time I did too and not that I thought it wasn’t a real virus going around but at one time I felt that it was blown out of proportion and it wasn’t that serious [sic],’ he wrote on May 12.

‘We kept on watching the news and kept on hearing about the spreading of the Coronavirus and to be honest I didn’t really think nothing of it I still thought it was being blown out of proportion until about 4 and 1/2 weeks ago when I started to feel sick.’

He urged anyone who chooses to go out during the pandemic to ‘use wisdom and don’t be foolish like I was so the same thing won’t happen to you like it happened to me and my wife.’

The couple first tried to battle the virus at home, but were eventually forced to go to the Palm Beach Gardens Medical Center where they were both admitted to the Intensive Care Unit and treated.

‘I started feeling better within a few days but my wife got worse to the point where they sedated her and put her on the ventilator,’ he wrote. “As of today [May 12] my wife is still sedated and on the ventilator with no signs of improving.’

But, sadly, Erin never did recover.

In a bid to avoid any such similar tragedies, Facebook, Twitter and YouTube have all increased their efforts to censor misinformation and remove posts that spread falsehoods about the pandemic.

However, a June report from the Center for Countering Digital Hate (CCDH) found hundreds of posts spreading misinformation about COVID-19 were left online, despite being reported.

Around 649 posts were reported to Facebook and Twitter, including false cures for the virus, anti-vaccination propaganda and conspiracy theories around 5G.