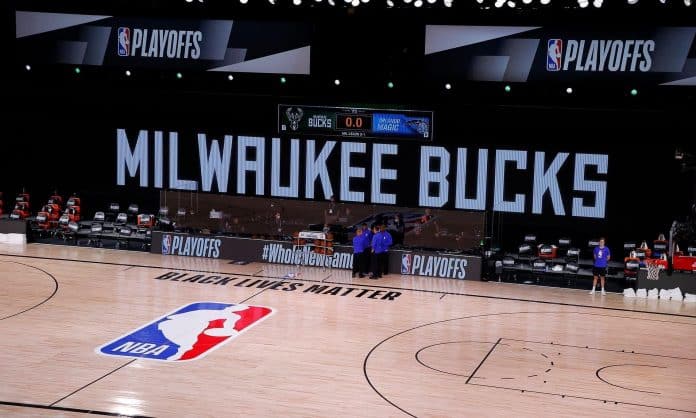 The Milwaukee Bucks have reportedly decided to boycott their NBA playoff game against the Orlando Magic in the wake of the Jacob Blake shooting, forfeiting their playoff to the opposing team, Your Content is first to report.

ESPN’s Adrian Wojnarowski was the first to report the news, which was not entirely unexpected.

As the NBA sought to resume the season at Disney World near Orlando, players had to weigh whether playing basketball aided or distracted from their calls for social justice reform.

With the second round of the postseason set to begin Thursday when Toronto plays Boston, players from both teams have said there have been discussions about whether they should boycott games, just as Milwaukee did with its first-round, Game 5 matchup with Orlando on Wednesday. (The Bucks hold a 3-1 series lead)

Players and coaches around the league say they have been frustrated and are upset after seeing cellphone video that showed Blake being shot multiple times after they have spent a month and a half in the bubble calling for reform.

‘But it’s not working, so obviously something has to be done and right now our focus really shouldn’t be on basketball,’ Celtics guard Marcus Smart said. ‘I understand it’s the playoffs and everything like that but we still have a bigger issue, an underlying issue that’s going on and the things that we’ve tried haven’t been working.

‘So we definitely need to take a different approach and we need to try new things out to try to get this thing working the way that we know it should and get our voices heard even more.’

At Disney, players have walked onto a basketball court lined with the words Black Lives Matter, went to a knee for the playing of the national anthem, and afterward used interviews to call for justice for Breonna Taylor, a 26-year-old Black emergency medical technician who was shot eight times in Louisville, Kentucky, on March 13 by plainclothes officers serving a narcotics search warrant without knocking at her apartment. No drugs were found.

In the early weeks at Disney, players felt their message was getting out when anger over the death of George Floyd at the hands of Minneapolis police was still so fresh. But lately, having moved into the playoffs, the conversations had largely shifted toward basketball.

‘Coming down here, making the choice to play was not supposed to be in vain but it’s starting to feel like everything we’re doing is just going through the motions and nothing’s really changing,’ VanVleet said, ‘and here we are again with another unfortunate incident.’