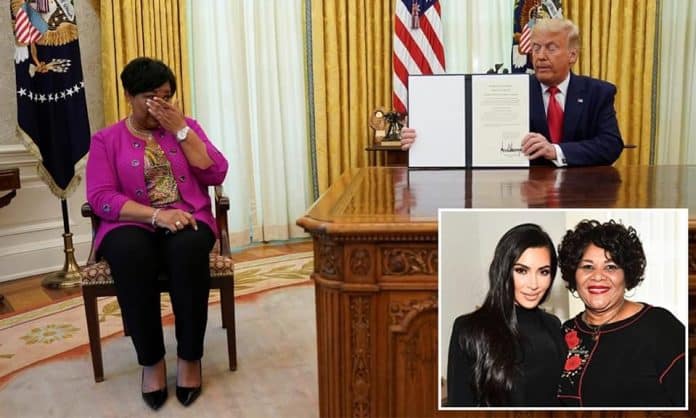 President Donald Trump has granted a full pardon to Alice Johnson for a non-violent drug dealing conviction after freeing her from 22-year sentence at the urging of Kim Kardashian — leaving the former felon wiping away tears, Your Content can report.

Johnson had delivered a powerful address Thursday night before the Republican National Convention from Washington, D.C., and so was seated with Trump at the White House the next day when reporters came in.

That’s when Trump surprised her with a full pardon, as he had only commuted her sentence in June of 2018.

Seated next to the Resolute Desk, Johnson wiped away tears.

“That means you have been fully pardoned, that’s the ultimate thing that can happen, that means you can do whatever you want in life,” Trump continued. “Just keep doing the great job you’re doing.”

Johnson had been convicted in 1996 for involvement in a Memphis cocaine trafficking scheme, which came with a life sentence, seen by Kardashian and other criminal justice reform advocates as much too tough for a non-violent offender.