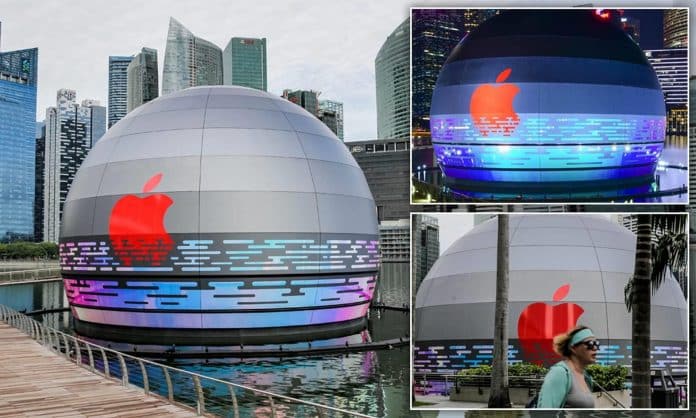 Apple unveiled plans for a floating store in the waters of the Singapore bay with reflective a dome design inspired by the country’s traditional paper lanterns, Your Content has learned.

The company is working on its first floating Apple Store, which will be a massive silver orb located near the opulent Marina Bay Sands Hotel in Singapore.

When the sun is out, glass panels offer views of downtown and the iconic waterfront.

At night, the globe will gently glow in a nod to the traditional paper lanterns carried by participants in the Mid-Autumn Festival.

A narrow slit at the top allows natural sunlight in and, from above, gives the appearance of a glass iris.

On the Apple website, the company says the store ‘will be at the heart of creativity, a place we’ve made for you to capture your ideas and passions.’

‘It will be a space for you to explore, connect and create something new.’

It will have an elevated boardwalk and an underwater tunnel connecting to the Marina Bay Sands shops, according to 9to5Mac.

Apple already has two locations in Singapore, one on Orchard Road and another in Singapore Changi Airport.

When he visited Singapore in December, Apple CEO said the city-state ‘could use a third store,’ commenting that the Orchard Road store was ‘pretty full.’

‘We try to look at where people are and where people live and arrange the Apple stores where it’s reasonably convenient to go to,’ Cook told The Straits Times.

This is the first Apple Store that floats on the water, but the company has made design a key element across its 511 consumer destinations.

The iconic Fifth Avenue location in New York City, which welcomes customers underground through a 32-foot glass cube, reopened last fall after being closed for two years for renovations.

The largest Apple Store in the world, located in the Mall of Emirates in Dubai, offers 50,000 square-feet of floor space, including an area for worship and a balcony overlooking Burj Khalifa.