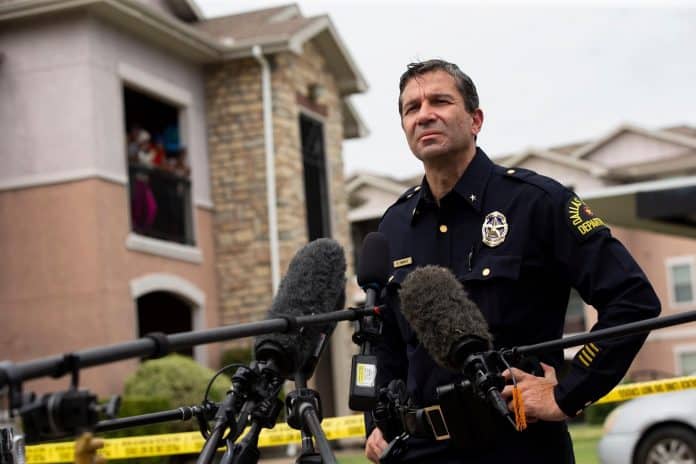 Police in Dallas have arrested a man after they say he claimed to have killed his entire family for disturbing him amid a headache, Your Content has learned.

The Dallas Police Department were on the scene of the triple homicide that occurred earlier this morning at the Rosemont Apartments on the 2600 block of John West Road.

Police say the man called 911 at approximately 11 a.m. and told dispatchers that he had killed his family.

Police immediately responded to the scene and located the bodies of a woman and two teenagers. All had been shot and killed, reports DFW Scanner.

An arrest warrant indicates the suspect, a 56-year-old man, got into an argument with his wife and children around 10AM.

The man told detectives that he had a headache and they were being too loud. They were allegedly yelling at him and “telling him nothing was wrong.”

During the argument, the man grabbed a gun and shot all three of them, the publication reports.

The wife, who was in her 50’s, and her two teenaged sons, 13 and 16, were all pronounced deceased at the apartment.

Deputy Chief Reuben Ramirez said officers took the man into custody at the scene to be interviewed at police headquarters.

James Lee Webb, 57, was later arrested on a charge of capital murder. His bail had not been set Monday night, and it was unclear whether he had an attorney.

He shot Bunton at least twice, then shot the teenagers, the affidavit says. After that, he waited an hour and then called 911 through a medical alert device, according to the document.

In an interview with detectives, Webb said that he was tired of the three victims yelling and saying that there was nothing wrong with him, so he shot them, the affidavit says.