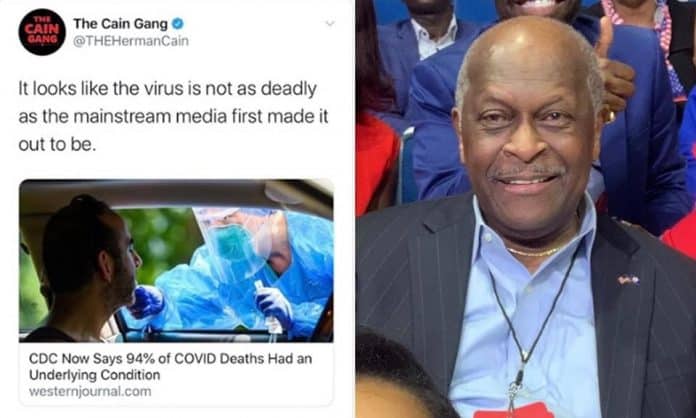 The Twitter account for Herman Cain on Sunday claimed that COVID-19 was ‘not as deadly’ as media outlets have portrayed it to be – despite the fact he died from it just a month ago.

Cain, a prominent Republican businessman and fervent Trump supporter, died from the coronavirus on July 30 after his office revealed he was hospitalized with the illness earlier that month. He was 74.

Cain’s daughter, Dr. Melanie Cain Gallo, announced on August 11 that the family would continue to update his social media accounts under the new moniker, The Cain Gang.

‘He would have wanted this platform to continue giving people reasons to feel that hope,’ she wrote on HermanCain.com.

In a now-deleted tweet, The Cain Gang shared a link to an article that claimed 94 per cent of COVID-19 deaths were linked to underlying conditions.

‘It looks like the virus is not as deadly as the mainstream media first made it out to be,’ the account wrote.

According to New York Times article last year, the publication was downgraded by Facebook after articles it published repeatedly popped up on fact-checking sites and Apples News blacklisted them for promoting stories with ‘views overwhelmingly rejected by the scientific community.’