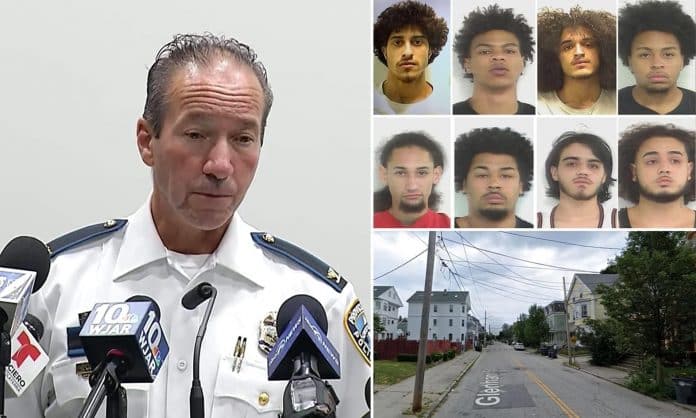 Eight men are charged with sexually assaulting a 16-year-old unconscious girl at a party after the victim’s mother found footage of the attack on Facebook, Your Content has learned.

However, an eighth suspect, Carlos Vasquez, 19, of Providence, remains at large, police announced.

Chester, who was allegedly seen in the video raping the teenager, has been charged with first-degree sexual assault on a person who was mentally incapacitated and conspiracy.

The other seven men have been arraigned on charges of assault with intent to commit first-degree sexual assault on a person who was mentally incapacitated, and conspiracy.

Providence Police Chief Hugh Clements Jr said the case, which he described as ‘horrifying, devastating, disturbing on so many levels,’ began unfolding on December 20, 2019, when the 16-year-old girl woke up at around 1am suffering from vaginal pain and cuts on her thighs at a home in the 100 block of Glenham Street.

According to court documents obtained by the Boston Globe, the girl was alone with Chester, who ordered her to leave.

When she retrieved her phone, she discovered that someone had used the device to send mocking messages to her boyfriend, saying that she was sexually assaulted by multiple men while she was unconscious.

‘Not only did they criminally and viciously assault her, but completely violated her in so many inhumane ways,’ Clements said.

During interviews with investigators, the teen remembered a man holding her down on a bed and pouring Hennessy brandy down her throat during a house party where she was brought by two people she knew, according to the records.

She also recalled waking up naked in a shower surrounded by 15 men who were laughing and possibly photographing her.

The girl and her family filed a police report later that day, but it was not until June 2020 that the investigation kicked into high gear thanks to the discovery of a video recording on Facebook depicting a portion of the sexual assault.

The footage, described by Police Major David Lapatin as ‘sickening,’ reportedly depicted the unconscious 16-year-old being sexually assaulted on a bed by multiple men while others stood by and watched.

The victim’s mother recorded the video off Facebook and brought it to the detectives, who used it to identify the men in the footage and obtain warrants for their arrests, which were executed last week in Providence.

When asked during the press conference carried live by WJAR why it took eight months to make arrests in this case, Chief Clements replied: ‘this isn’t like TV police shows: these investigations are complicated. They take a lot of time to solve’

Clements explained that it took months to gather video evidence and statements, and identify the suspects, some of whom were previously known only by their street nicknames.

Some of the other suspects, among them Colon and Luna, also have prior records, and Chief Clements said on Wednesday that all of them are well-known to the police.

‘Parents, watch your daughters, they don’t belong going to these parties, these are dangerous, dangerous parties,’ Major Lapatin said, adding that young men should be aware of the risks, too.