Lawyer for Kyle Rittenhouse to Sue Twitter for Wrongfully Convicting User with BAN, Vows to Take Their ‘A** Down’
L 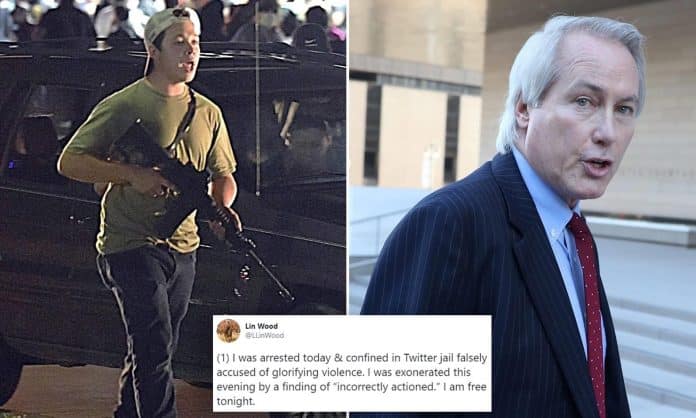 Kenosha gunman-turned-icon Kyle Rittenhouse’s lawyer plans to sue Twitter and threatens to take CEO Jack Dorsey’s ‘a** down’ after his account was blocked for ‘glorying violence,’ Your Content can reveal.

Lin Wood is one of several lawyers representing the 17-year-old after he was charged with shooting dead two protesters and injuring a third in Kenosha, Wisconsin last week.

Wood said he was unlawfully locked out of his Twitter account for nine hours on Tuesday night after he started tweeting about raising funds for Rittenhouse’s legal defense.

The attorney says he was falsely accused by Twitter of ‘glorifying violence’.

‘I was arrested today & confined in Twitter jail falsely accused of glorifying violence. I was exonerated this evening by a finding of ‘incorrectly actioned.’ I am free tonight,’ Wood tweeted after his account was restored.

‘Kyle Rittenhouse was arrested on 8/26 & is confined in Illinois jail falsely accused of murder. Kyle will be exonerated when truth is revealed by a finding of ‘incorrectly actioned.’ Kyle will be free soon.’

Wood now plans to file a lawsuit against Twitter and its CEO Jack Dorsey.

He told Fox News that his account being blocked was just the later example of Twitter trying to censor conservatives.

‘He has been abusing the First Amendment of this country for his own agenda.’

Wood said he knew Twitter would try and censor him and that he had been careful to abide by Twitter’s terms of service.

He said he has been compiling a ‘mountain of evidence’ against the social media giant to prove they are suppressing free speech.

‘This account was incorrectly actioned,’ the spokesperson said. ‘This has been reversed and the account has been reinstated.’