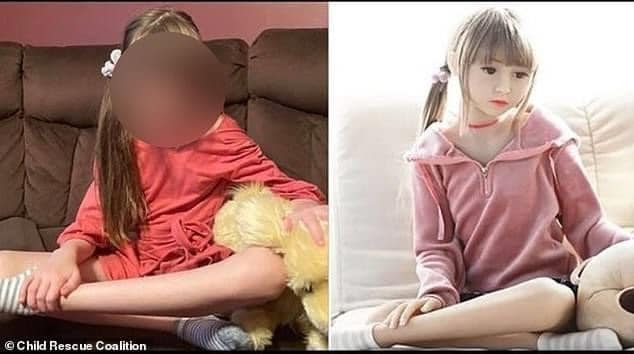 A Florida mom has broken down after discovering her daughter’s image was stolen and turned into a child sex doll that was being sold legally on Amazon and other adult websites, Your Content has learned.

The mother, who wished to be identified only as Terri, was left horrified last month when she came across pictures of an advertisement for a child sex doll that resembled her eight-year-old daughter Kat.

‘I read the message from my friend and saw the image, and I instantly started to cry uncontrollably,’ Terri told the Child Rescue Coalition, an organization in Boca Raton working against child sex abuse and predators.

‘I couldn’t imagine that some sicko would use my daughter’s photo to create something so ugly and evil to be used for abuse by pedophiles,’ she added.

The doll, which has since been removed from Amazon, was listed on the website as a ‘high quality sexy dolly live dolls for men’.

There were also a number of disturbing customer reviews for the item, including one posted in May, saying: ‘Good item during these times.’

Terri said she was in ‘shock’ that such a product would be sold on the same website the family uses to help with her daughter’s community service projects.

Kat, who suffers from CVID (Common Variable Immune Deficiency) is a child model and pageant contestant, her mom said.

She said she had posted photos of the little girl in a Facebook group where she shares updates on Kat’s illness, community projects and modeling work.

Terri believes the sex doll was modeled after a picture of Kat she shared in the group that showed her sitting on a couch with her legs crossed with her stuffed animal.

The doll in the advertisement not only had a similar outfit and hairstyle as her daughter’s but it was also posing the same way.

‘And I was in shock that Amazon would sell an inappropriate child sex doll on their website, she added. ‘I asked myself how can this be legal in the United States?’

Terri said she later learned the ad had been listed on Amazon since November 2019 and immediately contacted the website to have it taken down.

In an interview with NBC Miami, Terri said the post was removed four days later.

‘All sellers must follow our selling guidelines and those who do not will be subject to action including potential removal of their account. This product has been removed,’ Amazon said in a statement.

Terri has since teamed up with the Child Rescue Coalition which is lobbying for a federal law banning the sale and purchasing of child sex dolls.

While the doll is no longer for sale on Amazon, Terri said she has found it on several other websites including some where it’s displayed naked and has videos of people explaining how to use it.

‘I can’t sleep sometimes because that’s all I can think about, men who have sex with those dolls, and I can’t get them back. I just want to burn them,’ she told the news station.

Child sex dolls are currently legal in the U.S. except in Florida, Tennessee, and Kentucky, however, advocates say there should be an outright ban.

‘I want a new federal law to charge these buyers as sex offenders. I want the people that create these dolls banned from selling them in the United States, and charged and fined,’ Terri said.

The CRC has launched a petition online to ban the sale of child sex dolls.