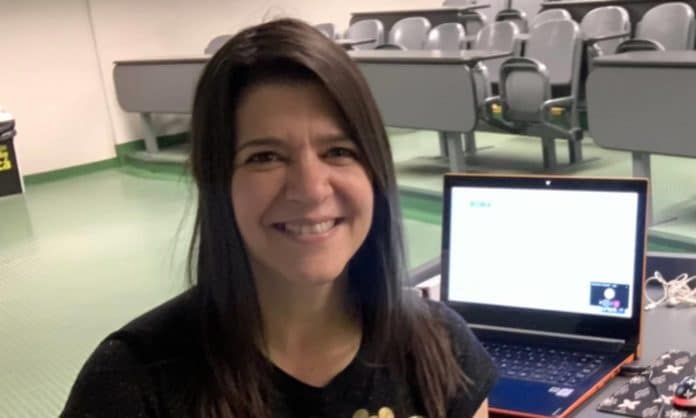 An Argentinian university professor has died of suspected coronavirus after gasping for breath while holding a Zoom lecture for students, Your Content has learned.

Paola de Simone, 46, who taught politics and international relations at the Universidad Argentina de la Empresa in Buenos Aires, died on Wednesday after having respiratory problems during a Zoom lecture, according to foreign reports.

On Tuesday, de Simone was holding the lecture when she began gasping for air, local news outlets reported.

According to local media sites Clarín and MDZ, the 46-year-old’s condition seemed so grave that her students asked her for her address so they could send an ambulance.

‘I can’t’, she said, according to reports.

De Simone wrote on Twitter at the end of August that she had been experiencing Covid-19 symptoms for at least four weeks. She added that her husband, who works as a doctor in A&E, was also exhausted.

‘It is very complicated. I have been here [with the virus] for more than four weeks and the symptoms do not go away,’ she wrote.

‘My husband is exhausted from working so much at the moment […].’

She continued to work despite suffering from a persistent cough, an academic coordinator from the university said in a statement.

The university shared a statement expressing their ‘deep sorrow’ over the mother and wife’s passing on Thursday.

‘Paola was a passionate and dedicated teacher, and a great person,’ the school wrote, according to Clarin.

A video of the collapse was circulated on social media.

The university asked members of the academic community to respect her memory.

As of yesterday, Argentina has more than 451,198 total coronavirus cases and at least 9,361 fatalities from the virus.