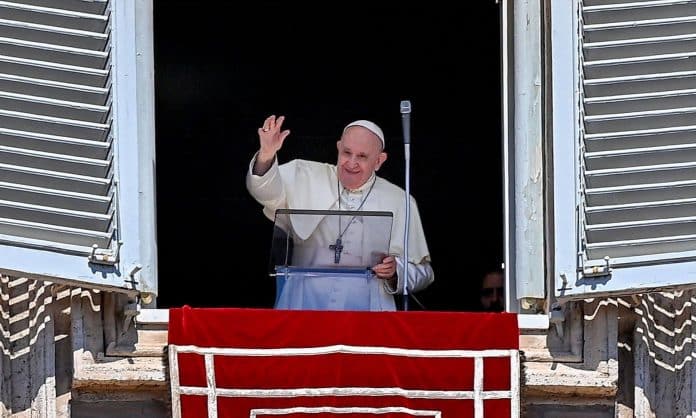 Pope Francis branded gossiping ‘a plague worse than COVID’ in off-script complaint during his weekly blessing, Your Content has learned.

Francis didn’t give specifics during his weekly blessing, but went on at some length to say the devil is the ‘biggest gossiper’ who is seeking to divide the church with his lies.

‘Please brothers and sisters, let’s try to not gossip,’ he said. ‘Gossip is a plague worse than COVID. Worse. Let’s make a big effort: No gossiping!’

Yesterday around 1,000 people marched on central Rome to protest the mandatory use of face masks for schoolchildren and compulsory vaccination for them.

More than 35,500 people have died in Italy – one of the first countries in Europe to be hit. The country, where almost 276,000 cases have been reported, emerged in May from a strict two-month lockdown.

The crowd was composed of anti-vaccine activists and conspiracy theorists.

‘No masks, no social distancing,’ a banner read. Others read ‘Personal freedom is inviolable’ and ‘Long live liberty.’

One protester carried a photo of Pope Francis with the word Satan written above it and the number 666 – considered a symbol of the devil.

He said there would be no new lockdown but only targeted confinements if needed.’

During his comments, Pope Francis also elaborated on a Gospel passage about the need to correct others privately when they do something wrong.

The Catholic hierarchy has long relied on this ‘fraternal correction’ among priests and bishops to correct them when they err without airing problems in public.