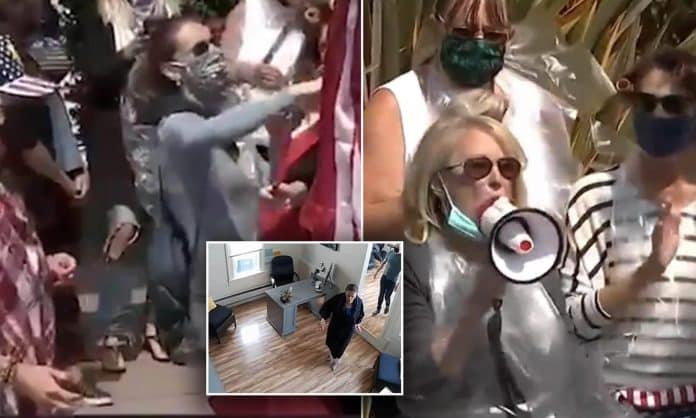 Female protesters wearing curlers in their hair gathered outside Nancy Pelosi’s San Francisco home and hang hairdryers in her tree as they mocked the House speaker’s maskless visit to a closed salon, Your Content has learned.

More than a dozen women descended on Pelosi’s pad in Pacific Heights on Thursday and mocked the Democratic house speaker by donning hair curlers and plastic drapes around their shoulders.

They took the stunt a step further by hanging hair dryers in a tree out front – a reference to the blow-out Pelosi received at eSalon SF on August 31.

Pelosi became the target of widespread ridicule last week after video of her not wearing a mask inside the salon – which was closed due to local coronavirus restrictions – was leaked to Fox News.

The California congresswoman’s stylist defended her by suggesting that the owner of eSalon, Erica Kious, had deliberately set Pelosi up and had authorized the controversial hair appointment.

But Kious denied that claim, telling Fox News last Wednesday: ‘[Pelosi] had called the stylist, or her assistant did, and had made the appointment so the appointment was already booked so there was no way I could have set that up.

“And I’ve had a camera system in there for five years, I mean I didn’t go in there and turn cameras on as soon as she walked in and set her up so that’s absolutely false.”

“Not only did I not set her up, her assertion that she is a victim and set up is totally false and outrageous.”

Kious said she has received death threats in the wake of exposing Pelosi’s trip and claimed her business was ‘done’.

A fundraiser – set up by former Nevada State GOP chairman Amy Tarkanian – has raised nearly $300,000 as of Monday to help Kious “to pay off any debts from the business that she is forced to shut down, expenses to relocate and reopen in a new location.”

The day after Kious’ interview, fellow enraged citizens flocked to Pelosi’s home to condemn decision to visit a salon without a mask whilst publicly insisting that California businesses remain closed and calling for a federal face covering mandate.

“What she has done is a slap in the face of not just a salon owner, but every woman, every man, every person who’s unemployed in the state of California, who lost their jobs and their livelihoods, many of whom are my friends,” one protester told KRON.

Video obtained by NewsNation showed the protesters hanging an American flag on a tree outside Pelosi’s house, alongside hair dryers and curlers.

‘[We] gather to make sure that everybody has an opportunity to earn a living and feed their families,’ one protester said before the group joined in a circle and raised their hands in unison.

San Francisco Mayor London Breed briefly addressed the protests on Friday, telling reporters it was time to ‘move on’.

“I get that they have these feelings, they are voicing their feelings, but we are doing the very best we can and I know that’s not good enough for them, I understand,” Breed said.

As Your Content readers know, after the video of her ill-advised salon trip went viral, Pelosi claimed she had fallen for “a set up.”

“I take responsibility for trusting the word of the neighborhood salon that I’ve been to over the years many times when they said we’re able to accommodate people one person at a time,” she said, admitting a hair salon holds the ability to “set up” the Speaker of the House.

“As it turns out, it was a setup. It was a set up, and I take responsibility for falling for a setup.

“I think that this salon owes me an apology, for setting me up.”

Pelosi also sought to defend her lack of mask by saying that she had taken it off to wash her hair.

“I always wear a mask. And that picture is when I just came out of the bowl,” the now-dubbed hypocrite quipped.

Kious has maintained that she did not approve the appointment and did not deliberately set Pelosi up – as the White House emerged as one of the congresswoman’s fiercest critics.

“Apparently the rules do not apply to Speaker Nancy Pelosi,” McEnany said.

“She wants small businesses to stay shut down but only reopen for her convenience. Do as I say not as I do, says Nancy Pelosi.”

President Donald Trump also weighed in, tweeting: “Crazy Nancy Pelosi is being decimated for having a beauty parlor opened, when all others are closed, and for not wearing a Mask – despite constantly lecturing everyone else. We will almost certainly take back the House, and send Nancy packing!

“The Beauty Parlor owner must really dislike Crazy Nancy Pelosi. Turning her in, on tape, is a really big deal. She probably treats him like she treats everyone else…”

A day later, he returned to the theme.

“I want the salon owner to lead the House of Representatives,” he told a cheering crowd in Pennsylvania.

“She made a terrible mistake because you want people that can’t be set up.

Trump attacked once again on Saturday, saying that Pelosi showed poor judgment and naivety but falling for the salon owner’s trick.

“Nancy Pelosi said she got ‘set up’ by the owner (a very good one) of a beauty parlor,” he tweeted. “If so, how will she do in negotiations against President Xi of China, President Putin of Russia, or Kim Jong Un of North Korea.

“Not so well, I suspect, but far better than Joe Hiden would do!” he added, referencing his repeated claims that Joe Biden has been hiding during the 2020 presidential campaign.