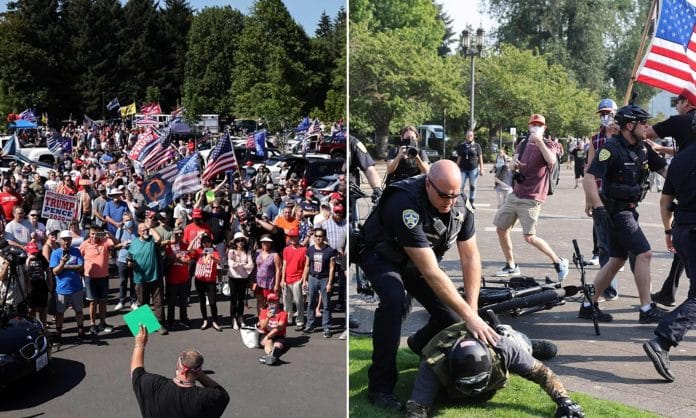 Chaos erupted in Oregon as armed Trump supporters clashed with BLM rioters and members of Antifa, leaving multiple people arrested as fights broke out between demonstrators after a huge MAGA vehicle rally drove from the Portland suburbs to Salem, Your Content has learned.

It’s a story with a lot of moving pieces, starting off in the early hours of Monday nearby suburban Portland and ended with members of Antifa cowering to the ground after being pummeled by patriots.

The caravan was organized a week after a member of Patriot Prayer, a pro-Trump group, was shot and killed at the end of a similar caravan.

Your Content was first to report Aaron ‘Jay’ Danielson, 39, was shot and killed by Antifa supporter Michael Reinoehl, 48, on August 29, as BLM and pro-Trump sides clashed in Portland.

On Monday afternoon another caravan was organized – this time deliberately avoiding the tumultuous city of Portland, and heading south from their meeting point to Salem.

Members of the Proud Boys pro-Trump group waited for the caravan to arrive in Salem, the state capital.

Journalism students from South Salem High School, on the ground to witness the scene, said that both sides were armed – the Trump supporters with ‘lots of weapons’ including guns, bats, batons, knives and bear spray.

The rioters with Antifa and BLM were armed with baseball bats, and both sides stood on opposite sidewalks, hurling insults and chants at each other.

Pro-Trump supporters used fire extinguishers on their rivals in effort to calm them down.

One Antifa-man was seen cowering beneath a shield as a man kicked him.

The man then began punching the domestic terrorist, raining down blows from a standing position as the BLM activist curled up on the floor.

As he was punching him, another man was seen pointing a paintball gun in their direction.

Chemical irritants appeared to have been used, and one man was pictured having his eyes and face doused with water.

A heavy police presence was seen on Salem’s usually-peaceful streets.

As dusk fell members of BLM appeared to have left the scene, and an uneasy calm returned, with the flag-waving Trump supporters left chatting on the grass in front of the Capitol.

The earlier caravan was organized on Facebook, and intended ‘to show our support for our great President Donald J. Trump and keep the momentum for Trump alive in Oregon.’

Participants were told to be ready at 1pm at Clackamas Community College in Oregon City.

At least two Trump supporters were arrested in Salem, Oregon, at the end of a procession from near Portland.

The Trump supporters fired paintballs at Black Lives Matter counter-protesters accompanied by Antifa and were led away by police.