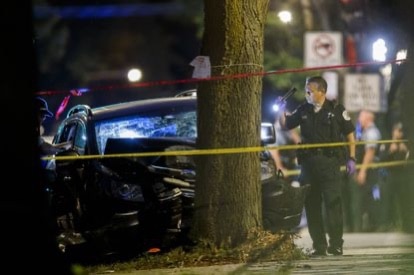 An 8-year-old girl was killed Monday evening when someone fired shots into the SUV she was riding in on Chicago’s South Side as her mother witnessed the ordeal erupt, Your Content can tragically confirm.

The girl and three adults were sitting in a Subaru SUV at the stop light on Union Avenue at West 47th Street when police say the gunman’s car intentionally pulled up behind them, targeting someone inside, reports ABC7.

But in the minutes before the first ambulance arrived, before police tied tape to light poles and fences, everyone focused on those trying to save the girl, fighting what would be a losing battle.

The girl did not move. Her eyes were closed. She wore black flip-flops, reports The Chicago Tribune.

From there, an officer stood nearby with his back to the girl, checking on her and those trying to save her but also watching for the ambulance.

The child was taken to Comer Children’s Hospital, where she was pronounced dead, McDermott said.

“I stand before you, saddened and angered, that another child has lost their life in senseless gun violence in the city of Chicago,” McDermott told reporters at the scene Monday night.

Chicago fire officials said the man and woman were taken to the University of Chicago Medical Center in critical condition, with each suffering a gunshot wound to the back.

The deceased child’s mother was in the SUV at the time and was wounded in the crash, McDermott said. She was taken to the University of Chicago Medical Center in good condition.

The Cook County medical examiner’s office hasn’t released details regarding the child’s death. The girl is the sixth child 10 or younger to be killed in Chicago since late June, according to data from the Chicago Sun-Times.