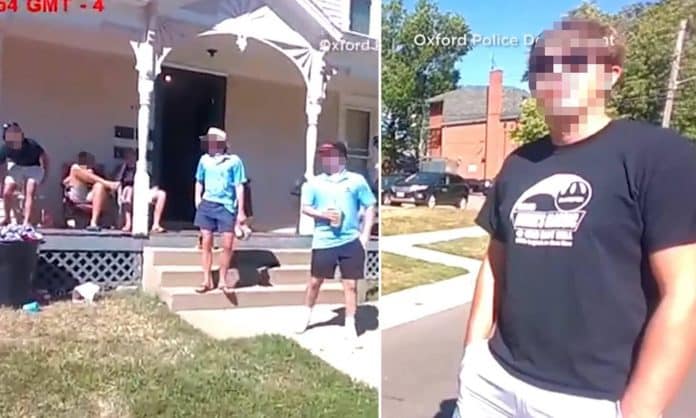 A student in Ohio who tested positive for coronavirus told local cops ‘that’s why I’m at my house’ when they questioned why he was hosting a party for 20 people during his 14-day quarantine period, Your Content has learned.

Over the Labor Day weekend, six Miami University students received citations for the party which breached the state’s cap on ten people at gatherings.

Oxford police officers noticed the crowd in the house on E. Walnut Street at around 4pm Saturday and body cam footage shows the astounded officer uncovering the host had coronavirus.

It comes as Miami University experiences a troubling spike in cases but announced Wednesday that it still plans to begin limited in-person classes.

The recording of Saturday’s party shows police approaching the group of young men sitting outside the house and asks to talk to a person who lives there.

One man steps forward and identifies himself, admitting that he knows he’s broken the state’s law on gatherings with no more than ten people.

According to Cincinnati.com, the man said that eight people lived in the house and the others had stopped by.

As the officer took his ID and ran it through the police database, he made the surprising discovery of the party host’s coronavirus diagnosis.

‘I’ve never seen this before. There’s an input on the computer that you tested positive for COVID,’ the officer says, which the student confirms, revealing he had received the diagnosis just a week before.

‘Are you supposed to be quarantining?’ the officer asks.

‘So you have other people here, and you’re positive for COVID? You see the problem? How many other people have COVID?’ the officer then asks.

The student initially claims that they all do but then back tracks to say he thinks just two.

‘I know. That’s why I’m staying home,’ the student claims.

Five residents of the house and a sixth man were cited a civil penalty that carries no criminal charge but comes with a $500 fine. One of the people cited was 20 years old and the other five were aged 21.

Cincinnati.com says that one of the residents of the house came to the police department after the citation and attempted to press trespassing charges against those who did not live there and were at the home.

The police report states that this resident claimed he had finished a coronavirus quarantine on September 4 and did not participate in Saturday’s party.

He was told he could not file charges on behalf of the entire household and to instead appeal the citation allegations.

The report adds another resident claimed they were in bed sick and did not participate in the gathering.

Oxford police said the citations would also be reported to university officials. It is not known what action the school may take against the students.

‘We do not know if anybody else at that party was aware of the COVID-positive residents because some of them left while the officer was there,’ Lt. Lara Fening told Local 12.

Nearly one in every 17 students at Miami University has now tested positive with coronavirus as cases rose to 1,117, many of them in the last two weeks, according to WCPO.