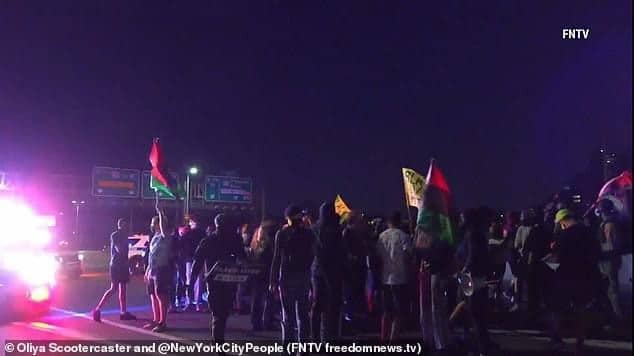 More than 100 BLM rioters shut down George Washington Bridge in Manhattan and then violently clashed with NYPD outside their precinct on another chaotic night in the big apple, Your Content has learned.

He boasted: ‘Say Less. Work More. THEY NEVER SHUT DOWN THE GEORGE WASHINGTON BRIDGE BEFORE.

‘We did that for our Sisters and Brothers who had their lives stolen by AmeriKKKa.’

Newsome had announced the demonstration on Thursday, tweeting: ‘Roll with us Saturday as we Shut S*** Down. @blmgreaterny @Boogie Down Bronx.’

The group, trailed by Port Authority Police, then moved on to the 34th Precinct, having met up with another group of demonstrators.

Four blocks up from the bridge, on West 183rd Street and Broadway, they were met at the precinct by a line of police.

After their rally, the police then moved to forcefully clear the area, some using batons on the protesters.

‘FREE THE TEAM!!!’ tweeted Newsome, saying that at least three protesters had been arrested.

‘Pigs at the 34th are not picking up the phone. CALL UNTIL THEY DO FREE @elletravelsvegan @gabriel.himself @jamaicanwriterchick.’