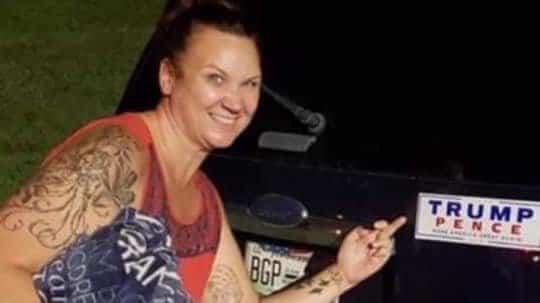 An unholy Catholic school is under fire after one of their own was captured sinning and swearing up a storm over President Trump — and taking it a step further, the hotheaded educator posed for a photo nearby a Trump bumper sticker with her middle fingers, Your Content has learned.

What’s more, hard-nosed nuns and school officials refuse to take action — claiming the teacher ‘has a right’ to disobey the holy way.

The John Carroll School, established in 1964, is a private Catholic school for grades 9–12. It is located in Bel Air, Harford County, Maryland.

“She must be wanting to make herself famous on Instagram — for those that don’t know John Carroll is a catholic high school — parents pay a hefty wage to have their children attend there and if one of their students did this on their social media page to some other politicized group they would surely be thrown out of this school.

“John Carroll is refusing to comment. How about we give her the fame she apparently so desires?

“And maybe the faculty at John Carroll will give her some attention too!”

Concerned parents have created a petition on Change.org in effort to bring the finger-throwing teacher out of their children’s lives.

“After speaking with many alumni and students alike, we do not believe John Carroll is taking proper procedures following the Facebook post of new teacher, Mrs. Stallworth. A teacher represents the school. The John Carroll administration has made a point of being careful on social media because we represent the school. If nothing is done, people will base their opinions on John Carroll on that post,” the petition reads.

“Many students and alumni are tired of John Carroll’s apparent bias. Time and time again, John Carroll has appealed to one side of the political spectrum and has done absolutely nothing to appeal to the other. Many students believe if a picture of a teacher giving a left-wing politician or movement the middle finger, they would be fired immediately, and John Carroll would immediately release a statement regarding the incident.