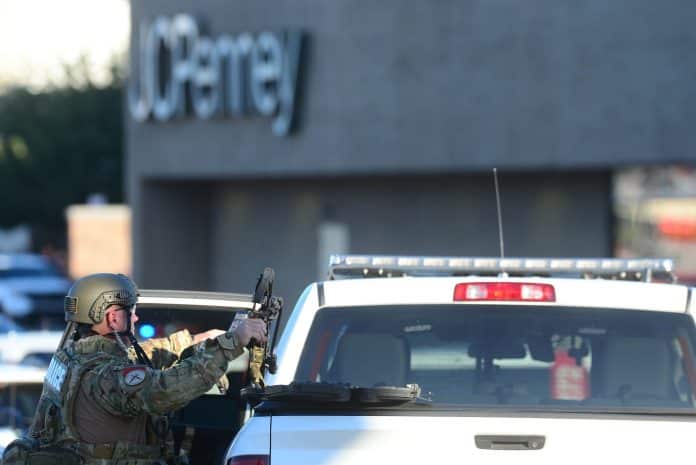 An active shooter situation has been lifted after a gunman who opened fire inside a Pennsylvania shopping mall — but the gunman remains on the loose Sunday morning, hours after dozens of police vehicles surrounded the building and officers rushed in to evacuate frightened shoppers, Your Content is learning.

The shooting happened at Lehigh Valley Mall in Fullerton, Pa., shortly before 5 p.m. Saturday. No injuries were reported, according to Fox News.

“The responding officers needed to get into the mall and make sure there was no active gunfire occurring at the moment,” Marks said Saturday night, according to WFMZ. “As far as our secondary operations right now, that’s just making sure that the mall is empty and we were able to account for everybody employed or at least at the mall at that point.”

According to Police Chief Marks, multiple casings were found, but no word on the exact number of shots fired.

“The responding officers needed to get into the mall and make sure there was no active gunfire occurring at the moment,” Marks said. “As far as our secondary operations right now, that’s just making sure that the mall is empty and we were able to account for everybody employed or at least at the mall at that point.”

Shoppers recounted a chaotic scene, as the shots rang out and panicked people streamed out of the mall, followed quickly by officers racing in.

Original reports to 911 were for an active shooter at J.C. Penney. Police arrived to find the store in lockdown, the doors also locked, according to police radio reports. Dispatchers said that the shooter was not in J.C. Penney but that four shell casings were found outside the Modell’s store, reports the Inquirer.

The publication reports parents were at home when their daughter called in hysterics from the store’s office, where she ran after the shooting.

She told her parents she was standing at Villa’s entrance, making sure shoppers were wearing masks upon entering, when she saw a man walk up and greet a young man who was waiting to go in. “Hey, yo,” he said, before firing several shots.

“I will never forget the second of silence that happened after the shots, as we processed what we heard,” Ashley Giammona, who was with her husband on the second floor told the Inquirer.

“Then everyone started screaming. My husband slid behind a jewelry display in the middle of the mall and I army-crawled to him.”

No arrests have been made as of Sunday, and no motive behind the shooting was released.  Investigators were reviewing surveillance footage in hopes of identifying a suspect.

Allentown Police Capt. Mike Becker told The Associated Press that his department was assisting Whitehall Township Police but had no other information to share.