Video: Man Who Claimed to Be Jesus for 3 Decades Arrested by Russia for ‘Psychological Abuse’ Over Preaching
V

Ruthless Russian authorities conducted a special operation to have a man who is said to be Jesus arrested. 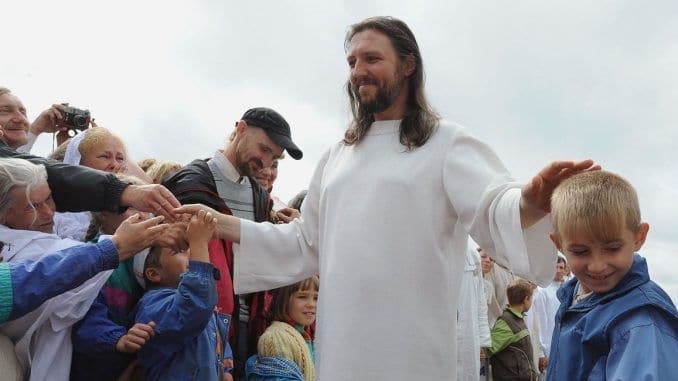 Ruthless Russian authorities have arrested a man who is said to be Jesus Christ, Your Content has learned.

Russian authorities mounted a special operation to arrest a former traffic police officer who claims to be the reincarnation of Jesus and has run a cult based in the depths of Siberia for the past three decades, The Guardian reports.

Helicopters and armed officers stormed communities run by Sergei Torop, known to his followers as Vissarion, and arrested him and two of his aides. Russia’s investigative committee said it would charge him with organising an illegal religious organisation, alleging that the cult extorted money from followers and subjected them to emotional abuse.

Toro, now 56, was a soldier in the Red Army before the Cold War ended, and worked as a traffic policeman until 1989. That’s when Vissarion lost his job, and coincidentally started to have visions revealing his “true nature.”

He moved into the Siberian wilderness in the 1990s, when Petropavlovka was just a group of huts in the forest. Now, it’s a huge, self-sufficient community with solar power, satellite TVs and organic vegetable gardens.

While Vissarion says he’s a reincarnation of Jesus, his Church of the Last Testament plays by a different set of rules. For one thing, polygamy is allowed. Vissarion himself has six children from two wives, including a woman he married when she was 19, after she posed nude for his paintings (Vissarion’s first wife left him after that).

Not surprisingly, many call Vissarion a liar, a swindler and a con man, and while this makes him feel “sad” he admits it’s “unavoidable. I’ll put down the basis that will change all humanity.”