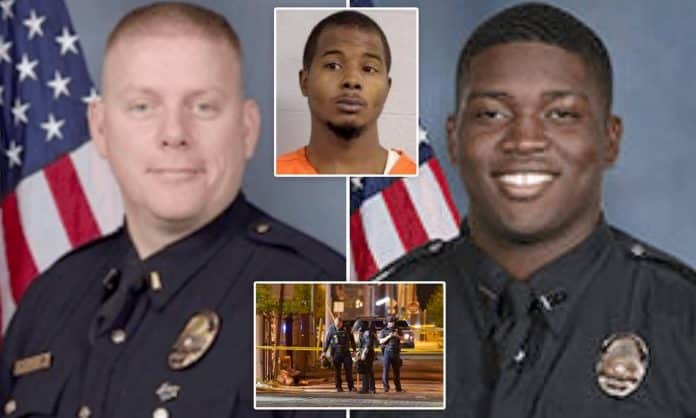 Two Louisville cops were shot overnight in what Your Content declared a terrorist attack after members of the domestic terror group Antifa stormed the streets, and we have learned the gunmen has dodged serious charges as he’s hit with a measly ‘wonton endangerment’ charge after ‘intentionally firing’ at police.

Major Aubrey Gregory and Officer Robinson Desroches were injured in the shooting Wednesday night. One of the officers was recovering out of hospital Thursday and the other was also expected to survive the attack.

Larynzo Johnson, 26, was arrested Wednesday night over the shooting and charged with first-degree assault of a police officer and first-degree wanton endangerment – the latter being the very same charge brought against the only cop to be indicted over Taylor’s slaying.

It is not clear why attempted murder charges have not been filed or whether they could be upgraded following an investigation.

“I want to emphasize how grateful I am for LMPD. The men and woman literally putting their lives of the line to protect our people and protect our city,” Mayor Greg Fischer said at the press conference. “What we saw last night with two police officers being shot is obviously, completely unacceptable. Violence will only be a source of pain, not a cure for pain. We know violence is never the answer.”

Shots rang out when Louisville police officers were conducting crowd control operations at Broadway and Brook Street “in response to a large crowd that had set fires, caused property damage and failed to disperse after being warned,” according to the post-arrest complaint provided by the Jefferson County Clerk Office.

Johnson “intentionally used a handgun to fire multiple bullets at officers” addressing the crowd, the complaint said. Two officers were struck by bullets causing serious physical injury. Police said witnesses spotted Johnson firing a handgun at officers and running from the scene. The complaint said he was also in possession of a handgun at the time of his arrest and law enforcement recovered video of the shooting showing the suspect fire at officers.

A police statement first obtained by the Associated Press said some people were arrested in Louisville, Ky., after damaging businesses and more were detained after jumping on city vehicles being used as barricades. Later, protesters who refused orders to disperse were arrested for curfew and unlawful assembly violations.

Schroeder said 127 people were arrested overnight amid the demonstrations following the grand jury decision to charge only one officer in connection to the police operation that killed Taylor, but not her death. There were also at least 16 instances of looting across the city.