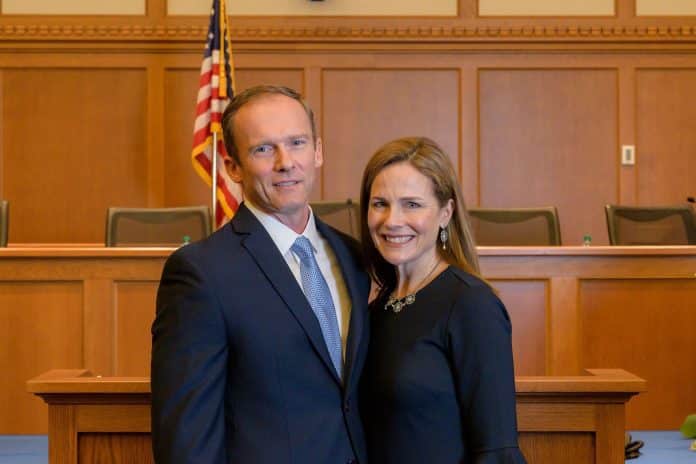 Judge Amy Coney Barrett and her family are on the move as they journey to Washington, D.C. where she is expected to receive the nomination to serve on the Supreme Court, Your Content has learned.

Barrett, who is widely expected to be nominated by President Trump to a seat on the Supreme Court, was filmed leaving her home in South Bend, Ind. early Saturday afternoon.

She was joined by husband Jesse Barrett and six of their seven children, all dressed for a special occasion.

Your Content can confirm once more he will be selecting Judge Amy Coney Barrett, as Your Content exclusively revealed on Sept. 19.

Daughter Juliet, 9, held her mother’s hand as she stole a glance at the news cameras that had set up camp across the street from the family’s tidy brick home — but Barrett studiously ignored them.

She has been a leading candidate and was a finalist to be Mr. Trump’s second Supreme Court pick. Barrett met with the president at the White House on Monday.

If confirmed, Barrett, who serves on the 7th U.S. Circuit Court of Appeals, would be Mr. Trump’s third Supreme Court appointee, following Justices Neil Gorsuch and Brett Kavanaugh, and just the fifth woman to serve on the high court. With her ascension to the Supreme Court, Barrett would further solidify its conservative majority, widening it to 6-3 and diluting the power of Chief Justice John Roberts as a swing vote.