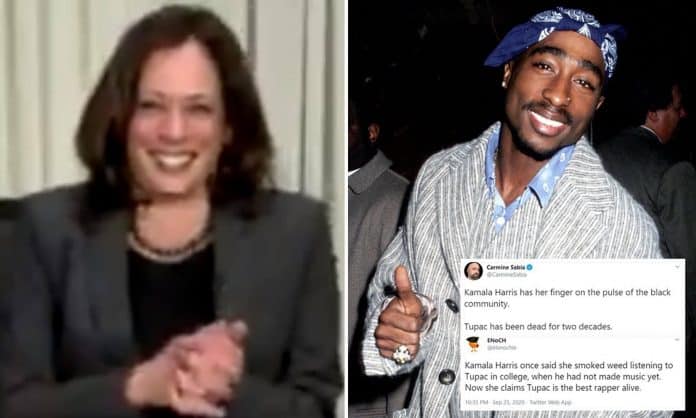 Kamala Harris has labeled Tupac the ‘best rapper alive’ 24 years after he was shot dead in a Las Vegas drive-by, Your Content has learned.

The Democratic vice presidential candidate made the gaffe during an interview with CNN’s Angela Rye at the NAACP’s virtual convention Friday, sending social media users into overdrive and fueling fresh debate around the ‘Tupac Lives’ conspiracy.

Harris paused for a second and answered: ‘Tupac.’

The two women started laughing and Rye pointed out that the New York rapper has been dead for more than two decades.

Harris laughed and replied: ‘Not alive, I know, I keep doing that.’

Rye jokingly defended the gaffe, pointing to the conspiracy theories that Tupac could be alive: ‘Listen, West Coast girls think Tupac lives on; I’m with you. So Tupac keep going.’

‘I keep doing that,’ Harris repeated and then seemed to struggle to come up with the name of any living rapper to answer the question.

Hip hop star Tupac Shakur was shot multiple times in a car on the night of September 7 1996 after he had gone to a Mike Tyson boxing match at the MGM Grand.