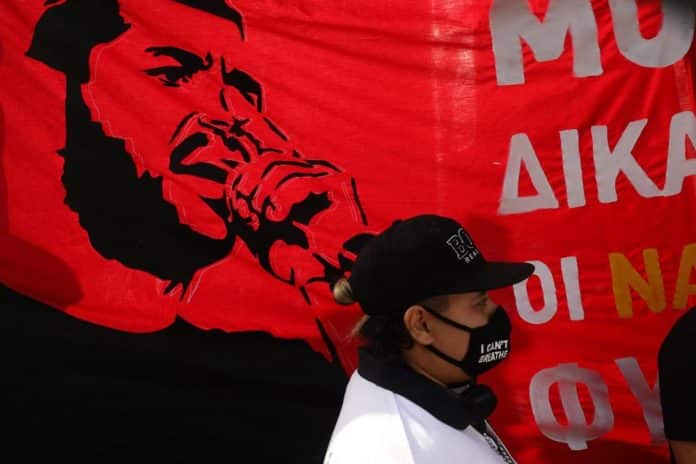 Golden Dawn, founded as a neo-Nazi group in the 1980s, rose to become Greece’s third-largest party during the country’s recent financial crisis and was seen as a model for many extreme-right groups worldwide.

“(It’s) a truly historic day for Greece, democracy, and the rule of law,” he tweeted following a televised address. “After the Greek people voted the neo-Nazi party of Golden Dawn out of Parliament in the last election, today the Greek justice system convicted its leadership of operating as a criminal organization.”

As news of the guilty verdicts broke, cheers and celebrations erupted among at least 20,000 people at an anti-fascist rally outside the Athens courthouse. Some protesters threw gasoline bombs and stones at police, who responded with tear gas and water cannons.

The marathon trial had been assessing four cases rolled into one: the 2013 fatal stabbing of Greek rap singer Pavlos Fyssas, physical attacks on Egyptian fishermen in 2012 and on left-wing activists in 2013, and whether Golden Dawn was operating as a criminal organization.

The three-member panel of judges also found Giorgos Roupakias guilty of the murder of Fyssas, prompting applause inside the courtroom and among the crowd outside. Roupakias had been accused of being a party supporter who delivered the fatal stab wounds to Fyssas. Another 15 defendants — none of them former lawmakers — were convicted as accomplices, while two were acquitted.

Leaving the courthouse, Fyssas’ mother Magda Fyssa, who had attended nearly every court session over the last five years, raised her arms and shouted: “Pavlos did it. My son!”

Only 11 of the 68 defendants were present, with the rest represented by their lawyers. None of the former Golden Dawn lawmakers were in court.

“The ruling demonstrates that they were just a gang of knife-wielding thugs who took their orders from the top,” said Thanassis Kambayiannis, a lawyer representing the fishermen.

After the verdicts, defense lawyers began summations before sentencing, a process that could last several days. Those convicted of leading a criminal organization face up to 15 years in prison, and those convicted of participating face up to 10 years. Roupakias faces a life sentence.

“Today’s landmark ruling against Golden Dawn sends a clear and unequivocal message that hate crimes will no longer be tolerated,” Eva Cosse at Human Rights Watch told The Associated Press. “Victims, survivors, their families and society as a whole have finally seen justice done.”

Security was tight at the courthouse, with around 2,000 police, drones and a police helicopter deployed.

Outside the courthouse, protester George Kounanis, who works as an employment equality campaigner for LGBT workers, said he was relieved by the verdict.Full Coverage:Greece

“We have lived under the threat they posed for years. They have beaten, threatened and verbally abused same-sex couples. They hate everything that is not Greek and macho,” he said. “But we never cowed and never stopped speaking out against them. So it does feel like a vindication. A lot of people supported them, so we cannot be complacent.”

Politicians from across the political spectrum, from the governing conservative New Democracy party to Greece’s Communist Party and the former governing left-wing Syriza party, were outside the courthouse.

At the crux of the case was whether the string of violent attacks could be linked to Golden Dawn’s leadership. Golden Dawn denied any direct link to the attacks and described the trial and charges against the party’s leadership as an “unprecedented conspiracy” aimed at curbing its rise in popularity.

The party elected members to the Greek parliament in four separate elections, maintaining a presence between 2012 and 2019. While distancing itself from its neo-Nazi origins, it maintained links with extreme right-wing and white supremacist groups in Europe and the U.S. The European Jewish Congress called the ruling “a welcome and important decision” while Amnesty International’s Europe director, Nils Muiznieks, argued that the verdict would have an impact across the continent. “Golden Dawn’s activities exposed a fissure that exists not just within Greek society, but across Europe and beyond,” he said. “Today’s landmark ruling is a recognition of the systemic threat posed to our societies by a violent, racist group and a commitment that this threat must not be allowed to continue.”