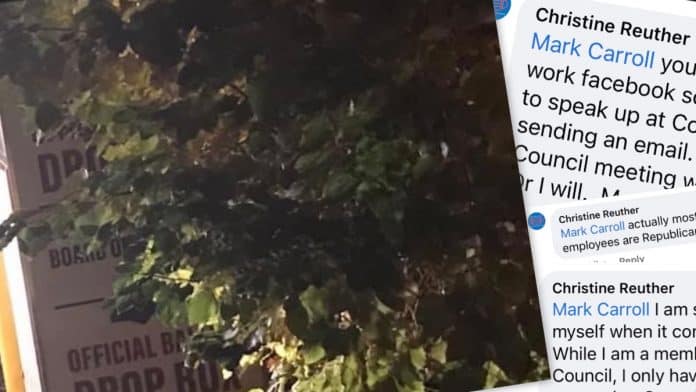 Residents in in a small suburban Pennsylvania county are urged to get their hiking boots on amid election day after locals discovered a ‘secure ballot box’ meticulously placed in between unkept shrubbery and thorn bushes, photographs obtained by Your Content reveal.

What’s more, Your Content has also learned that the money clenching county recruited a lone man who goes by Ian Thomas Jay to empty the ‘secure’ boxes after the election.

“Who has keys for these boxes, who vetted these individuals, is it a independent company or is it people the county picked—ya know, like democrats?” Delaware County watchdog Mark Carroll inquired.

“It’s me, I’ll answer any questions you’d like!” wrote Thomas Jay. “I will be emptying the boxes.”

“Yes. Unless they are marked BOFA in which case the Delaware County Democratic Committee will be opening them.”

The secluded ballot box—located in Nether Providence— sits in an unlit area behind a building’s vacant parking lot.

“$2.2 million Delaware County Council these ballot boxes look like recycled trash cans. And the one in my township is hidden behind the building between trees.” Carroll wrote in a scolding Facebook post Thursday.

According to the county—there is a whopping $2.1 million ballot box budget.

The conversation took an action-packed twist when a councilwoman dived nose-deep into controversy on the public Facebook chain.

The comment insinuates the promise made by Delaware County District Attorney Jack Stollsteimer—in addition to all democratic candidates collectively—to remove several expired individuals from their positions and ‘start on a clean slate’ was used to con constituents of their vote.

“I just spent two and a half hours watching the R’s on County Council vote against a resolution to create a public oversight board for George W. Hill.” Jack Stollsteimer told Your Content prior to winning the election.

“Simple, good governance step they’re too stupid to support. We need to sweep these guys out … and start with a clean slate.”

Reuther confirmed Saturday the slate remains untouched, breaking the promise that secured them enough votes to serve the county.

“No, the changes in process were not a result of Democrats taking the majority of County Council.”

The councilwoman noted her opinions are not those of her colleagues—but she only revealed factual information with no opinionated content.

“I am speaking only for myself when it comes to opinions. While I am a member of County Council, I only have one vote. I can report that Council will be meeting in person at our agenda and legislative meetings on Oct 20 and 21. That was announced at the Oct 7 Council meeting.”