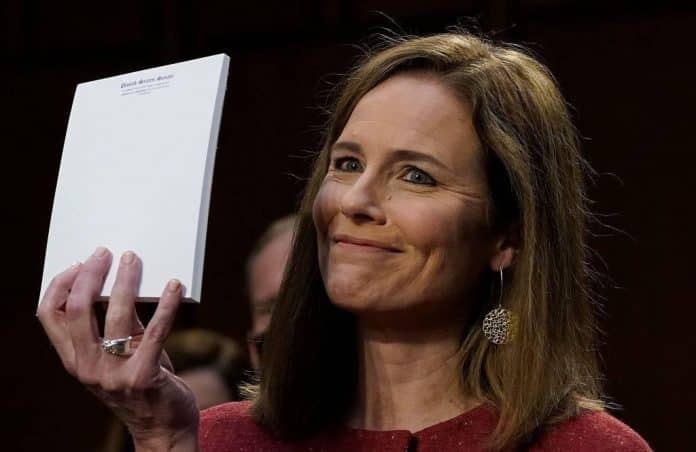 Supreme Court nominee Judge Amy Coney Barrett held up a blank notepad when Sen. John Cornyn asked her to show the public the notes she’s been using to answer the numerous questions spat at her during day two of the confirmation hearings, Your Content has learned.

“Most of us have multiple notebooks and notes and books, things like that in front of us,” said Sen. Cornyn (video below). “Can you hold up what you’ve been referring to in answering our questions?”

Cornyn, a Republican member of the Senate Judiciary Committee, told Barrett that senators had multiple notebooks, notes and books to reference during the hearing. Then, he asked if she could hold up the preparatory materials she was using to answer the committee’s questions, at which point she showed them a blank notepad save the Senate’s letterhead

“That’s impressive,” Cornyn said before continuing on with his other line of questioning.

As the internet often does, social media users capitalized on the moment to put their own spin on what transpired. Comedian Kathy Griffin, who’s butted heads with President Donald Trump on numerous occasions, posted a photo of Barrett with her notebook and said it was a photo of her “brain scan.”

If confirmed, Barrett, who serves on the 7th U.S. Circuit Court of Appeals, would be Mr. Trump’s third Supreme Court appointee, following Justices Neil Gorsuch and Brett Kavanaugh, and just the fifth woman to serve on the high court.

With her ascension to the Supreme Court, Barrett would further solidify its conservative majority, widening it to 6-3 and diluting the power of Chief Justice John Roberts as a swing vote.