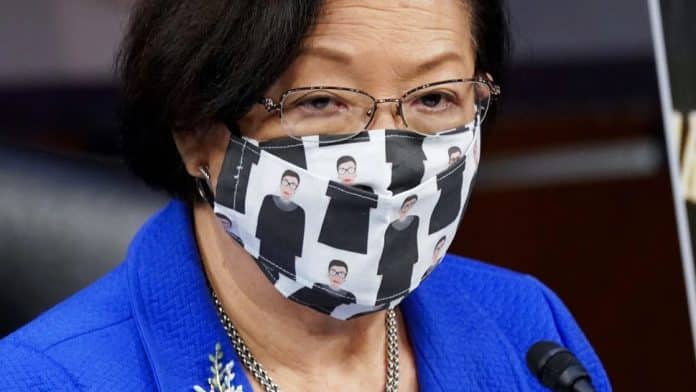 A United States Senator quipped ‘hell no’ when asked to enter their vote to nominate Judge Amy Coney Barrett to the serve on the United States Supreme Court, Your Content has learned.

While the roll-call vote was being conducted, Hirono could be seen walking up to the table and entering her vote against Barrett by saying “hell no” while putting her thumb down.

Hirono, who strongly opposed Justice Brett Kavanaugh’s confirmation in 2018, askedBarrett during Senate Judiciary Committee hearings earlier this month if the judge had ever “made unwanted requests for sexual favors.”

“Since you became a legal adult, have you ever made unwanted requests for sexual favors or committed any verbal or physical harassment or assault of a sexual nature?” Hirono asked, to which Barrett answered, “No, Senator Hirono.”

Barrett, who served on the 7th U.S. Circuit Court of Appeals, would be Mr. Trump’s third Supreme Court appointee, following Justices Neil Gorsuch and Brett Kavanaugh, and just the fifth woman to serve on the high court.

With her ascension to the Supreme Court, Barrett would further solidify its conservative majority, widening it to 6-3 and diluting the power of Chief Justice John Roberts as a swing vote.

Democratic leaders asked Vice President Mike Pence to stay away from presiding over her Senate confirmation due to potential health risks after his aides tested positive for COVID-19, the Associated Press reports.

But although Pence isn’t needed to break a tie, the vote would present a dramatic opportunity for him to preside over confirmation of Trump’s third Supreme Court justice.

Monday’s vote is the closest high court confirmation ever to a presidential election, and the first in modern times with no support from the minority party.

The spiking COVID-19 crisis has hung over the proceedings. Vice President Mike Pence’s office said Monday he would not preside over the Senate session unless his tie-breaking vote is needed after Democrats asked him to stay away when his aides tested positive for COVID-19.

Hours after the beloved justice passed away Friday, Allred, who was was inducted into the National Women’s Hall of Fame in 2019, exclusively told Your Content Ginsburg ‘was our hero.’

“She was the greatest Supreme Court Justice ever for women’s rights and equal rights for all. She was our Hero!”