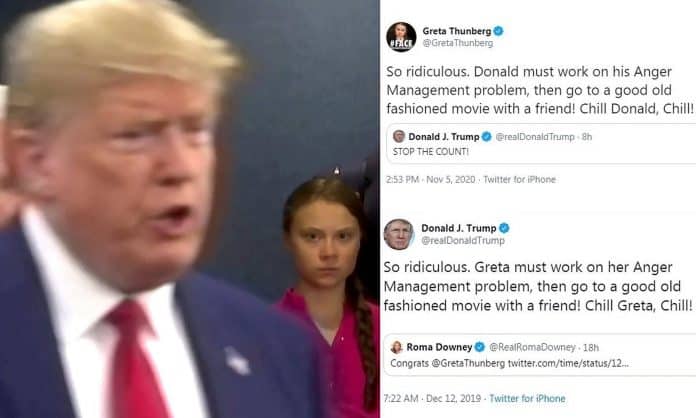 Greta Thunberg mocked President Donald Trump and told him to ‘chill’ as he continued to reiterate claims of voter fraud, Your Content has learned.

imicking a tweet Trump directed at her last year, the 17-year-old suggested he should ‘chill’.

Responding to the president’s tweet, Thunberg wrote: ‘So ridiculous. Donald must work on his Anger Management problem, then go to a good old fashioned movie with a friend! Chill Donald, Chill!’

The president falsely claimed victory in the election and said without evidence that a ‘fraud on the American nation’ was being carried out.

Thunberg’s tweet to Trump on Thursday was a near word-for-word parody of Trump’s words, which he wrote last December after the environmental campaigner was named Person Of The Year by Time Magazine.

In response to that tweet, the teenager updated her Twitter bio to read: ‘A teenager working on her anger management problem. Currently chilling and watching a good old fashioned movie with a friend.’

Thousands of Twitter users rushed to applaud Thunberg after she changed her bio to mock Trump.

At the time he tweeted: ‘So ridiculous. Greta must work on her Anger Management problem, then go to a good old fashioned movie with a friend! Chill Greta, Chill!’

Thunberg became Time’s youngest-ever Person of the Year in 2019.

Her accusations that world leaders are failing the younger generation have made headlines, including her shouts of ‘How dare you?’ during the UN General Assembly in 2019.

Trump, who has withdrawn the US from the Paris Climate Treaty, has said he doesn’t believe global warming is mainly caused by humans.