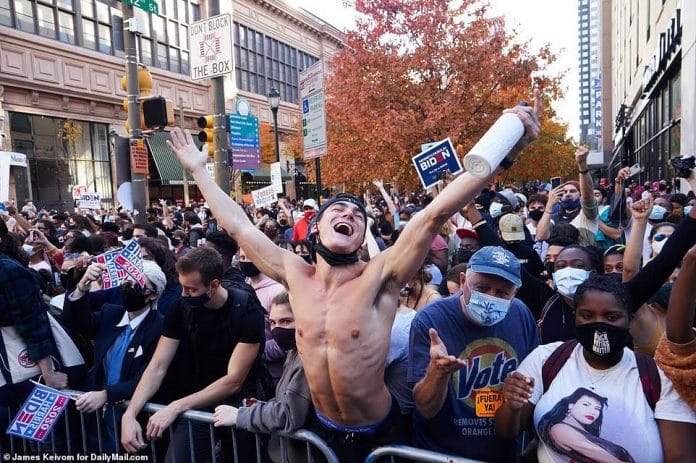 As the crowds flock to city streets across the United States to celebrate the apparent win of Joe Biden and Kamala Harris—the country’s coronavirus case count passed 10 million with virtually all U.S. states continuing to struggle with alarming spikes in COVID-19 infections, Your Content has learned.

Coronavirus cases have hit a daily all-time high for the third consecutive day in Pennsylvania—and tens of thousands are taking to the state’s city streets to celebrate the win of Biden.

As Your Content readers know, New York Gov. Cuomo said on a briefing call Friday he planned to post the National Guard to airports and increase other enforcement presence to clamp down on travelers entering the state over the holiday season as he warned people to stay away from the Empire state if they don’t have a negative test.

The new policy came into force Wednesday allowing travelers arriving in the state to isolate for just four days so long as they provide a negative COVID test three days before entering and take a second negative test on day four.

However, if the traveler fails to follow the new testing rules, they will be required to complete a 14-day quarantine.

The number of states on the list has ballooned of late, with 41 states currently on the list as cases surge across America.

Both New York state and the city has recorded some of the highest cases they have seen in months.

As of Friday, the state’s infection rate had risen to 1.9 percent.

Portchester, Westchester County, was added to his micro-cluster strategy making it a yellow zone after its positivity rate increased.

And a micro-cluster strategy will be planned for Erie, Monroe and Onondaga counties, Cuomo said.

The governor also announced that the Buffalo Bills sports stadium will stay closed, saying it ‘would be reckless from a public health point of view to open the stadium to spectators at this time’.

However some areas of the state are being downgraded or removed from the cluster strategy after their figures have improved.

The Far Rockaway cluster in Queens, which was recently downgraded to a yellow zone, will no longer be considered a cluster zone at all.

The Brooklyn red and yellow cluster zones will also reduce in size by 50 percent and restrictions will ease up in the Rockland and Orange counties.

‘We are obviously in a different phase with COVID,’ Cuomo said.

‘We’ve been talking about it for weeks but we have to acknowledge it. The numbers are changing all across the globe, all across the country. The challenge for our state is managing the increase.’

On Thursday, de Blasio said city officials were ‘concerned’ after positivity rates in two Staten Island zip codes soared past 3 percent – which has long been the threshold for setting off alarm bells.

‘In a couple of zip codes in Staten Island, we see the kind of increase that makes us concerned,’ de Blasio said Thursday at a City Hall press briefing.

‘We’re going to send out a lot of activity now to address this.’

Last week, New York City Mayor Bill de Blasio warned that ‘huge restrictions’ could be on the horizon for the Big Apple after what he described as a ‘meaningful jump’ in infections.

The growth in New York is indicative of the nationwide trend, with the US recording its five highest days of cases on record in the days running up to the election.

Another 2,997 people tested positive for the virus in the state Wednesday, taking the total to 518,812.

As Your Content readers know, Joe Biden ended up making a gaffe during the most important speech of his life on Saturday night as he misspoke over the numbers of people who have died from the coronavirus in the United States.

The 77-year-old took to the stage for his first speech as president-elect, and was full swing as he gave his election victory speech to hundreds of supporters in Wilmington, Delaware.

After reciting a hymn, he said: ‘I hope it can provide some comfort and solace to the more than 230-million-thousand families who have lost a loved one to this terrible virus this year.’

The current coronavirus death toll in the US is more than 230,000.

The former Vice President has been known to make verbal blunders in the past in congress, on the debate stage and while campaigning, even calling himself a ‘gaffe machine’ at one point.

But he has always maintained that his slip ups are innocuous mistakes that shouldn’t carry weight.

During Saturday night’s address Biden proclaimed his victory over Donald Trump as he spoke directly to the nation saying: ‘The people have delivered us a clear victory.’

Celebrations broke out across American cities as Joe Biden was named the next president of the United States, with pedestrians dancing in the streets, motorists honking their horns and cheers filling the air—with coronavirus slithering through air partials.

Cities across the nation erupted in celebration as the news broke, with hundreds taking to the streets of New York City, Washington DC, Atlanta, Philadelphia and many more popping champagne corks, waving Biden-Harris flags and dancing, as the agonizing four-day wait for the new president to be announced finally came to an end.

Coronavirus appeared to be a distant memory as crowds of people gathered, danced and embraced, with a distinct lack of social distancing despite infection rates soaring across America.

And celebrations continued well into the evening, as supporters danced in fountains and drank in the streets in cities across the country.

People flocked onto the sidewalks in Upper East Side to clap and cheer while cars drove past honking their horns.

In Brooklyn, hundreds gathered in the streets cheering and clapping as people in cars waved Biden-Harris signs.

By the afternoon, thousands had gathered in Big Apple landmarks including Times Square and Washington Square Park where they marched, toasted one another in celebration, played music and broke into dance.

Over in Philadelphia – where the latest votes to be counted pushed Biden to victory – people cried with joy and embraced in the streets outside the Pennsylvania Convention Center as they learned the news.

Some Biden supporters danced in the streets as they couldn’t contain their emotion over the victory for the Democrat.

In Washington DC, Biden fans choked back tears of relief and hugged each other along Black Lives Matter plaza before huge crowds gathered outside the White House holding banners telling Trump ‘You’re fired’.

To date no elected official in any major metropolitan city asked residents to refrain from gathering in masses to celebrate the newfound power.