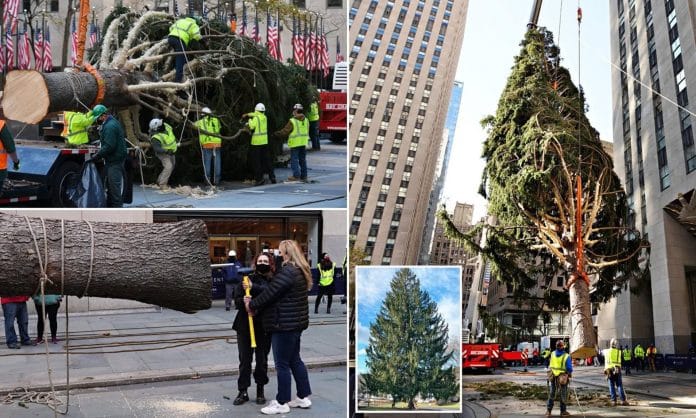 New York City received a much-need boost on Saturday with the arrival of a giant Christmas tree that marks the unofficial start of the 2020 holiday season, but the delivery comes as their governor sidelines all holiday festivities due to coronavirus, Your Content has learned.

The 75-foot tall Norway spruce arrived at Rockefeller Center in the early morning hours accompanied by a police escort along the 185-mile route from Oneonta, New York.

The tree was lifted into its spot by a crane and will be decorated over the coming weeks with more than five miles of lights.

A lighting ceremony for the 11-ton tree is planned at Rockefeller Plaza for December 2, according to NBC, whose headquarters stand in front of the plaza and which will televise the event.

In-person spectators will not be allowed at the lighting ceremony, which usually draws hundreds of holiday well-wishers, this year due to the coronavirus pandemic, the network said.

Visitors should be able to visit the tree during the holiday season — though organizers still haven’t announced plans to allow in-person viewing while limiting crowd sizes.

‘Details about how to visit the lit Rockefeller Center Christmas Tree will be announced in the coming weeks,’ the property managers said in a statement.

Every year, the Rockefeller Center tree is decorated with thousands of lights on a five-mile-long wire and topped with a large star. It is visited by millions of tourists and New York residents.

This year’s tree was donated by Daddy Al’s General Store in Oneonta.

Tishman Speyer, the company that owns Rockefeller Center, has said it’s especially proud to keep up the tree tradition this year.

The pandemic has spurred the cancellation of some other New York holiday customs, such as the Radio City Christmas Spectacular.

Earlier this week, the tree was cut down from the front yard of a home in upstate New York.

But the ongoing COVID-19 pandemic has forced Rockefeller Center to bar in-person crowds from seeing the famous tree-lighting ceremony on December 2 while it figures out how it will permit visitors to get a glimpse of the illuminated spectacle.

The 11-ton tree was cut down on Thursday from a home in Oneonta, New York, in preparation for its 170-mile journey to Manhattan where it will be displayed at Rockefeller Center during the holiday season.

The rink will also close far earlier this season compared to previous years. The last day skaters can pay a visit to the rink is January 17. The annual Christmas Spectacular at Radio City Music Hall, which features the Rockettes, has been canceled.

There will also be no in-person crowds watching the Macy’s Thanksgiving Day Parade, though preparations are underway to stage a modified version that will be broadcast on television.

After the tree’s arrival in Midtown Manhattan on Saturday, it will receive its usual glow-up, which will consist of some 50,000 multi-colored LED lights attached to approximately 5 miles of wire.

A crane will hoist the 900-pound Swarovski crystal star atop the tree for the second straight year.

The star measures 9-foot 4-inches in diameter and has 3 million Swarovski crystals on 70 illuminated spikes.

Earlier this week, Mayor Bill de Blasio held out hope that a limited number of in-person viewers would be allowed to attend the tree-lighting ceremony.

While he was quick to express his ‘childlike’ wonder over the lighting of the spruce, the mayor didn’t offer any concrete answers, simply suggesting that indoor events should be avoided.

‘We want that to be a great experience, especially in the middle of everything people are dealing with,’ de Blasio said on Tuesday.

‘This is something really special each year for this city, and I don’t know about you, but I still have a kind of childlike wonder when the lights go on in that tree each year.

‘I think people understand that we have to be really careful with the danger of a second wave, but we’re going to take extra precautions to make sure that if people are trying to go by to see it, that we can keep it to the right number of folks at any given time.’

The mayor assured: ‘We’ll get an update on how it will be handled, but we will take proper precautions.’