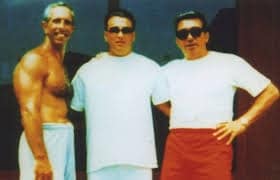 The Philadelphia FBI has offered a $10,000 reward in search of the killer responsible for the brutal murder of Philly native Gino DiPietro, Your Content has learned.

The FBI’s Philadelphia Division is seeking the public’s assistance in identifying the unknown individual(s) responsible for the murder of Gino DiPietro. On December 12, 2012, at approximately 2:55 p.m., DiPietro was shot to death as he emerged from his vehicle near his residence in Philadelphia.

Video from surveillance cameras in the area of the murder shows a vehicle (the getaway vehicle) repeatedly driving by the area where DiPietro was killed in the hours prior to the murder. Witnesses later saw an unidentified male (the shooter) approach and shoot DiPietro multiple times. Surveillance video captured the shooter running away from the scene and witnesses observed the shooter get into the getaway vehicle.

The driver of this vehicle was later arrested and convicted for his role in the offense and is serving a state prison sentence. The FBI is seeking information regarding the shooter and any other individuals involved in the planning of the murder.

The FBI is offering a reward of up to $10,000 for information leading to the arrest and conviction of the person(s) responsible for the murder of Gino DiPietro.

Anyone with information that may be helpful to investigators is asked to call the FBI at 215-418-4000 or share it online at tips.fbi.gov. Tipsters can remain anonymous.

A Seeking Information poster for this case has been posted to FBI.gov.